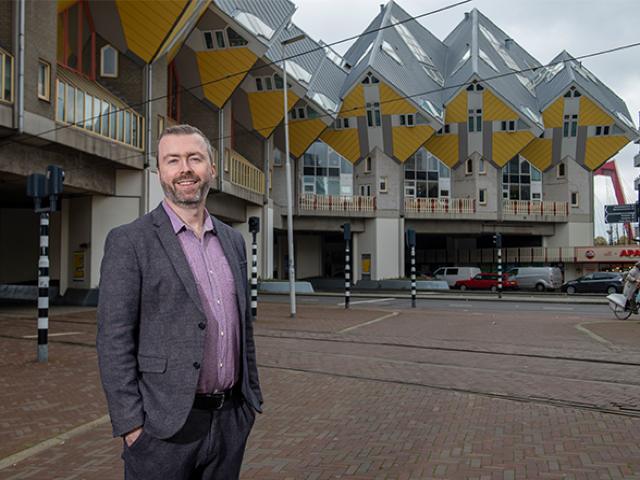 For me, the just transition is a unique opportunity to engage governments, businesses, third sector organisations and consumers in the most significant reformulation of modern-day society.

Climate change targets can be a unifying aim for driving an urgent response away from fossil fuels towards a post-carbon society.

Moving from a carbon-intensive world to a more decentralised, technologically-enabled future needs to take place fairly. Just transition is a new social contract between global citizens and the instruments of state, private interest and public good.

We can only realise the transformative potential of engaging in a just transition through a critical reflection of what rights need to be preserved: how can such a transition empower the global citizen with new rights while demanding new radical, just, social and ecological outcomes?

This article was originally published in Enlit Europe’s Guide to season 3 – A just transition.

Climate change discourse remains limited to the first dimension of these, known as prohibitive justice. Just transition is more than simply maintaining the rights of fossil fuel-polluting countries to compensate their affected communities.

In this way, new rights must emerge for citizens in the Global South and low carbon intensive regions. Above all, we must combine these affirmative justice principles with a transformative outlook that seeks to reconfigure our world placing global justice and ecological wellness at the fore.

I take the example of Malawi. It epitomises the existing problem with our current approach to the transition. As one minister told to me: “Malawi doesn’t produce fossil fuels. It can’t sell fossil fuels to our neighbours. Malawi can’t afford fossil fuels. Meaning, we don’t matter.”

Supplying cheap electricity through renewable means is only part of what we should aim for. Innovative forms of multilevel decision-making processes must lead to a deeper redistribution of benefits and burdens.

So what is the world doing about this? The good news is that international organisations are responding in their own way to this idea of a just transition. They explicitly state a commitment to it in the Paris Agreement in 2015.

It also reappeared at G7 annual meetings of national leaders and in the COP UNFCCC process, most notably leading to the Silesia declaration in 2018. Other international organisations have different versions of just transition strategies including the International Monetary Fund, United Nations Development Programme and the World Trade Organization.

This action goes beyond strategies. It increasingly means financing. The example of the EU is the most prominent to date. The EU Green deal established a multidimensional framework for financing the transition, with its own named Just Transition Platform and associated financial mechanisms.

The amounts have varied over the past few years and have become supplemented by national examples of such financing in Scotland, Germany and Poland as notable examples.

This has not been without controversy. Terms and conditions have been in question. For me, the controversy plays a secondary role to the embeddedness of a simplified view of the just transition.

One that could do more harm than good. It remains focused on compensating its most carbon intensive territories, rather than financing new spaces of low carbon technology initiatives or considering its external power to achieve more radical global change. The financing of just transition is a nice start but needs to reorient in a more meaningful way.

Business and trade unions working together

Additional signs of hope emerge from trade unions. ‘Just transition’ emerged directly from coal mining disputes in the US in the 1980s. A central part of the term is about replacing jobs lost by the move away from carbon intensive industries.

The contemporary refocus on future renewable sector employment is welcome. They designed such progressive campaigns to engage all sections of our existing carbon intensive societies in a new vision for the future. This is of course even more prominent considering the pandemic.

Businesses and trade union interests need to work together to achieve a just transition. The technological revolution means that the nature of work is due to undergo its most radical transformation in generations.

Just transition means that such organisations, and the employees in the middle, deserve proper work in this reconfigured low carbon world. One in which technology enables human development in a more meaningful way than previous industrial revolutions.

The interplay between such interests and the urgency of the climate transition is the key component to reconfiguring financial mechanisms and strategies for a just transition.

Environmental organisations such as Friends of the Earth, backed by grassroots networks of community initiatives and informal groupings, are central forces for sustainable transformations such as that demanded by a just transition.

Work here is urgently required to enable comparable societal forces beyond its dominant Anglo-American or European presence today. A just transition is one in which bottom-up societal forces drive new processes of decision-making in both the virtual and physical worlds.

If we want global action more thought is needed as to what this looks like in China, India or Brazil, for example. We must therefore support community action through just transition financial mechanisms with a more pronounced global scale reflection point.

In conclusion, a just transition involves a wholesale re-imagination of where burdens and benefits will be shared, what type of new decision-making processes are possible and how we mitigate new inequalities that may emerge from the transition away from fossil fuels.

It enables the achievement of climate change targets through the collective support of each section of society. This will need translated into contextually sensitive reformulated social contracts between government, business, third sector organisations and citizens.

It ultimately must lead to a transformational approach to justice that is driven by the low carbon technological revolution. This means that prohibitive and affirmative principles of justice need to be complemented with more transformative thinking.

This is most urgently needed in existing and planned financial mechanisms on just transition.

About the author: Professor Darren McCauley is Chair in the Management of International Social Challenges at Erasmus University Rotterdam