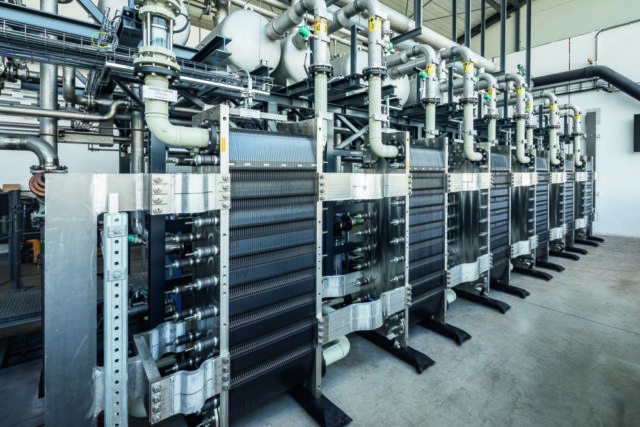 What is currently the world’s largest pilot plant for the CO2-neutral production of hydrogen has successfully commenced operation at the voestalpine site in Linz, simultaneously setting an international milestone in the advancement of new energy supply options.

The new plant has a capacity of over 6 MW, and is currently regarded as the most effective and state-of-the-art facility of its type. It will be used to test whether the technology deployed to produce green hydrogen is suitable for use on an industrial scale.

As part of the EU-funded H2FUTURE project, partners voestalpine, VERBUND, Siemens, Austrian Power Grid, K1-MET and TNO are researching the industrial production of green hydrogen as a means of replacing fossil fuels in steel production over the long term.

The project, which receives EUR 18 million ($20m) in EU funding, will investigate the potential to provide network services, and potentially compensate for fluctuations in the power grid.

“This plant uses renewable energy to split water into its constituent parts, hydrogen and oxygen. The process creates a huge potential to decarbonize the energy and economic system and make it more flexible,” says Wolfgang Hesoun, chairman of the Management Board of Siemens AG Österreich (Siemens Austria).

In addition, electrolysis can also be used to support the power grid, by extracting excess power from the grid as required. This is an important factor in view of the increasing fluctuations in power generated by renewables.

The high-tech heart of the plant, the Siemens Silyzer 300, has a capacity of 6 MW, and can generate 1,200 cubic meters of green hydrogen.

Global climate goals aim to almost completely eliminate CO2 emissions by 2050. This poses challenges for industrial enterprises and energy suppliers, and demands new technological solutions in both sectors. In this context, CO2-neutral (“green”) hydrogen is regarded as the most promising future option for facilitating the energy transition.

According to Herbert Eibensteiner, chairman of the Management Board of voestalpine AG: “We have set ourselves a clear goal of greater direct avoidance of CO2 emissions in steel manufacturing over the coming years. With the start of operations at the world’s largest hydrogen pilot plant at our site in Linz, we have succeeded in taking a significant step towards driving this technological transformation.

“The most important precondition for scenario planning based on green electricity and green hydrogen is, however, sufficient quantities of renewable energy available at commercially realistic prices. This is the only way in which we can apply tomorrow’s technologies in a truly competitive manner,” Eibensteiner adds.

As a raw material, energy source, and storage medium, green hydrogen could contribute significantly to decarbonizing energy and CO2-intensive processes. There are extremely interesting potential applications in the industrial sector as well as transport, especially for freight and rail transport. Furthermore, responsive electrolysers can be used to provision power grids, offering services for increasingly overloaded transmission networks. H2FUTURE is a prime example of cross-sector cooperation generating added value.

“The H2Future project is one of the flagship projects of the FCH JU that aim to help European electrolyser OEMs develop products that are of the quality and capacity required by European industry to reduce its CO2 emissions,” says Bart Biebuyck, executive director of the Fuel Cell Hydrogen Joint Undertaking (FCH JU).

The FCH JU is making up to EUR 12 million ($13.2m) of research funding available for the project.

If economically feasible, from today’s perspective this option would reduce the Group’s CO2 emissions by around a third sometime between 2030 and 2035. Over the long-term, voestalpine is striving to successively increase the use of green hydrogen in the steel production process, allowing the Group to reduce its CO2 emissions by a total of over 80 per cent by 2050.