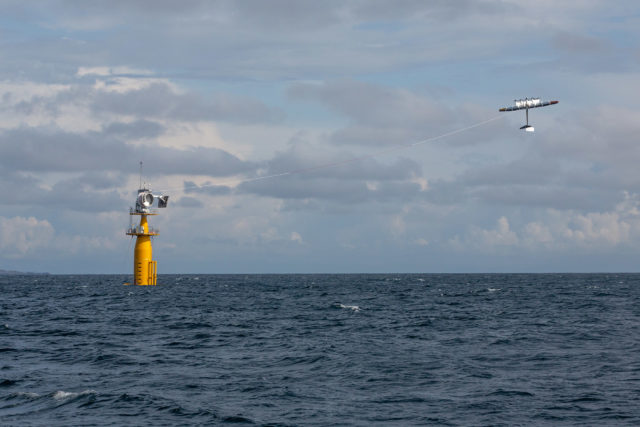 If you associate kites with your childhood, it might be time to re-think the concept. A California-based company has developed a self-flying energy kite that may be the answer to tapping into increasing wind power around the world.

CNN Business recently interviewed Makani about technology they have developed that can harness the most powerful winds in the middle of the ocean, too far for offshore turbines to reach. Their autonomous kite looks like an airplane tethered to a base, installed on a floating platform in water. Tests are currently underway off the coast of Norway.

Currently only 6 per cent of the world’s energy comes from wind power. Makani intends to use the energy kite to generate utility-scale power to electrify communities around the world.

Energy kites use a wing tethered to a ground station to efficiently harness energy from the wind. As the kite flies autonomously in loops, rotors on the wing spin as the wind moves through them, generating electricity that is sent down the tether to the grid.

In an interview with Rachel Crane, CNN’s innovation correspondent, Makani CEO Fort Felker said: “There are many areas around the world that really don’t have a good resource for renewable power but do have offshore wind resources, our lightweight kites create the possibility that we could tap that resource very economically and bring renewable power to hundreds of millions of people.”

The CNN report further mentions that the technology is more cost-efficient than a traditional wind turbine and less labour intensive.

The kite is super lightweight as it’s made of carbon fiber. It has an 85-foot wingspan, is launched from a base station and is constrained by a 1,400-foot tether as it flies autonomously in circles with guidance from computers. Crosswinds spin the kite’s eight rotors to move a generator that produces electricity that’s sent back to the grid through the tether.

Visit the website for more detail or take a look at the video of their journey below.

Power plant emissions are being measured from space