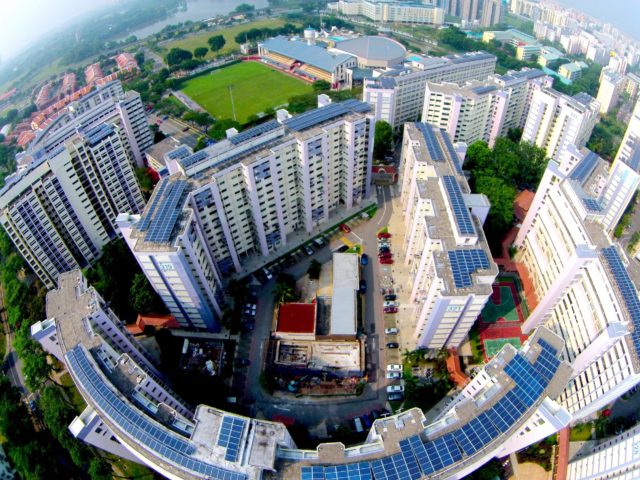 Sunseap Group has won the tender for one of Singapore’s largest solar projects. The SolarNova 4 project will require the installation of more than 170,000 solar panels on rooftops of Housing & Development Board (HDB) blocks.

As part of the project, Sunseap will be installing solar photovoltaic (PV) systems across more than 1,200 HDB blocks and 49 government sites. The PV systems, when completed, will generate up to 70 MW of solar energy, which can potentially offset about 42,152 tonnes of carbon emissions, an amount typically generated from powering about 17,500 4-room HDB flats annually.

Sunseap will deploy bifacial solar panels, the latest in solar technology. Unlike typical solar panels, the bifacial panels are able to generate power on both sides of the modules and therefore increase energy yield by up to 15 per cent. They are also more durable, lasting up to 30 years as compared to 25 years previously.

The SolarNova programme is jointly led by the HDB and the Economic Development Board and aggregates solar demand across government agencies to leverage economies of scale. That means that agencies with smaller energy demands are able to enjoy clean energy at a lower cost.

Mr Frank Phuan, CEO and executive director of Sunseap Group, said: “This project is a significant milestone for solar adoption in Singapore. When this project is completed, Sunseap would have installed solar systems on top of more than 2,700 HDB blocks or more than 27% of all HDB blocks. This is also in line with Singapore’s pledge at the recent United Nations Climate Action Summit where our Prime Minister said that Singapore will be switching to a cleaner fuel mix and using cleaner energy solutions in order to reduce our carbon emission by 2030.

“This is a testament to our tremendous growth since we started Sunseap eight years ago and it would not have been possible without the support of partners like HDB and EDB.”

Mr Lawrence Wu, president and executive director of Sunseap Group, said: “This tender truly reinvigorates us and the work we do by providing us the thrust to continue playing our part as a corporation in combating climate change, and an opportunity to generate more renewable energy for the masses in Singapore. Sunseap will continue to be relentless in developing new sources of clean energy generation and energy efficiency projects across Singapore to help achieve the reduction of carbon emissions.”

This is the second SolaNova tender won by Sunseap, the first being in 2015.

Since its inception in 2011, Sunseap has grown to become one of the largest developers in the region with a total contracted, completed and developmental asset project capacity of 1.7 GW-peak.