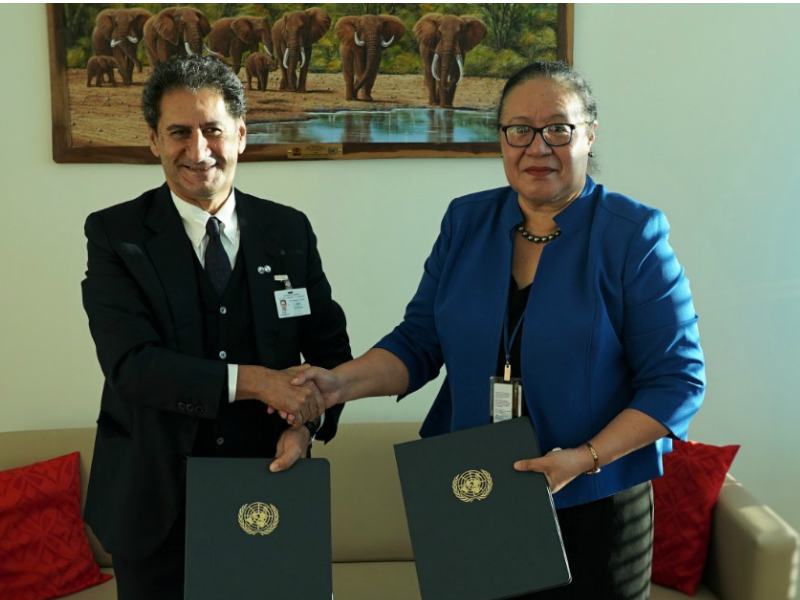 For small islands, climate change is already a reality. Rising sea levels and storms of increasing severity are not distant threats.

In the face of tremendous adversity however, small islands are fighting back. “Despite having contributed the least to climate change, Small Island Developing States (SIDS) remain the most vulnerable to its effects,” said IRENA director-general Francesco La Camera.

“Yet they show great leadership and resolve in pressing for urgent global action,” La Camera noted.

Strengthened collaboration between the two organisations contributes to global efforts to implement the 2030 Agenda for Sustainable Development and Nationally Determined Contributions (NDCs) in the context of renewable energy.

“We are the ground zero of a global climate and biodiversity crisis,” said Wilfred Peter Elrington, Foreign Minister of Belize. “We cannot be silenced when it is our citizens that are on the line.”

UN-OHRLLS Under-Secretary-General Fekitamoeloa Katoa ‘Utoikamanu said: “The least developed countries, landlocked developing countries and small island developing states are at risk of being left behind, together in partnership we can make faster progress. We must close energy gaps and support countries transitioning to more sustainable and renewable energy sources by 2030.

‘Utoikamanu continued: “Countries cannot achieve this alone. We are proud to strengthen our collaboration with IRENA to combine our expertise and comparative advantages to support countries to achieve their renewable energy goals.”

“The energy transformation brings significant opportunity to developed and developing countries alike. Renewables are not only our most effective response to rising emissions, but they are also an engine of low-carbon development, supporting energy access, energy security and climate resilience in the world’s most vulnerable countries,” said La Camera.

“This partnership bolsters the efforts of both organisations to achieve SDG7 and the wider sustainable development goals.”

The two organisations will collaborate on activities to support LDCs, LLDCs and SIDS to build renewables-based energy systems, close the energy access gaps experienced by these groups of countries and harness the socio-economic and environmental benefits of renewable energy.

LDCs, LLDCs and SIDS consist of 91 countries with a total population of 1.1 billion. Access to energy in these vulnerable countries remains a major challenge.

About half of the people in the world without electricity live in LDCs. In 2016, the proportion of the population in LDCs with access to electricity was 44.8 per cent. In LLDCs it was 53.1 per cent, and in SIDS it was 76.3 per cent.