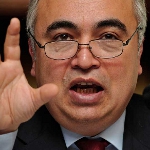 “We need to revise our approach to energy development so that communities are not forced to sacrifice clean air in return for economic growth.”

So said the executive director of the International Energy Agency in London yesterday as the IEA launched its first ever in-depth analysis of air quality.

Fatih Birol said that “clean air is a basic human right that most of the world’s population lacks. No country ” rich or poor ” can claim that the task of tackling air pollution is complete. But governments are far from powerless to act and need to act now. Proven energy policies and technologies can deliver major cuts in air pollution around the world and bring health benefits, provide broader access to energy and improve sustainability.”

According to the IEA, an estimated 6.5 million deaths a year are linked to air pollution ” and it says this number will increase significantly in coming decades unless the energy sector takes greater action to curb emissions.

At a press conference yesterday, Birol said that no country is immune and to highlight this stated that 80 per cent of all cities that monitor pollution levels fail to meet the World Health Organizatio air quality standards.

The IEA said that premature deaths from outdoor air pollution are projected to rise from the current level of 3 million to 4.5 million by 2040, with most of this increase set to be in developing Asia.

The IEA report released today states that energy production and use ” mostly from unregulated, poorly regulated or inefficient fuel combustion ” are the most important man-made sources of key air pollutant emissions.

However, the IEA stresses that “the air quality outlook is not set in stone, but rather it is a policy choice” and goes on to suggest that a 7 per cent increase in total energy investment between now and 2040 would be enough to “produce a sharp improvement in health”.

“Under such a scenario, premature deaths from outdoor air pollution would decline by 1.7 million in 2040à¢€¦ and those from household pollution would fall by 1.6 million annually.”

The report highlights three key areas for government action: Setting an ambitious long-term air quality goal, to which all stakeholders can subscribe and against which the efficacy of the various pollution mitigation options can be assessed; Putting in place a package of clean air policies for the energy sector to achieve the long-term goal, drawing on a cost-effective mix of direct emissions controls, regulation and other measures, giving due weight to the co-benefits for other energy policy objectives; and Ensuring effective monitoring, enforcement, evaluation and communication: keeping a strategy on course requires reliable data, a continuous focus on compliance and on policy improvement, and timely and transparent public information.

Dr Birol said that implementing the IEA’s strategy could “push energy-related pollution levels into a steep decline in all countries. It can also deliver universal access to modern energy, a rapid peak and decline in global greenhouse-gas emissions and lower fossil-fuel import bills in many countries.”