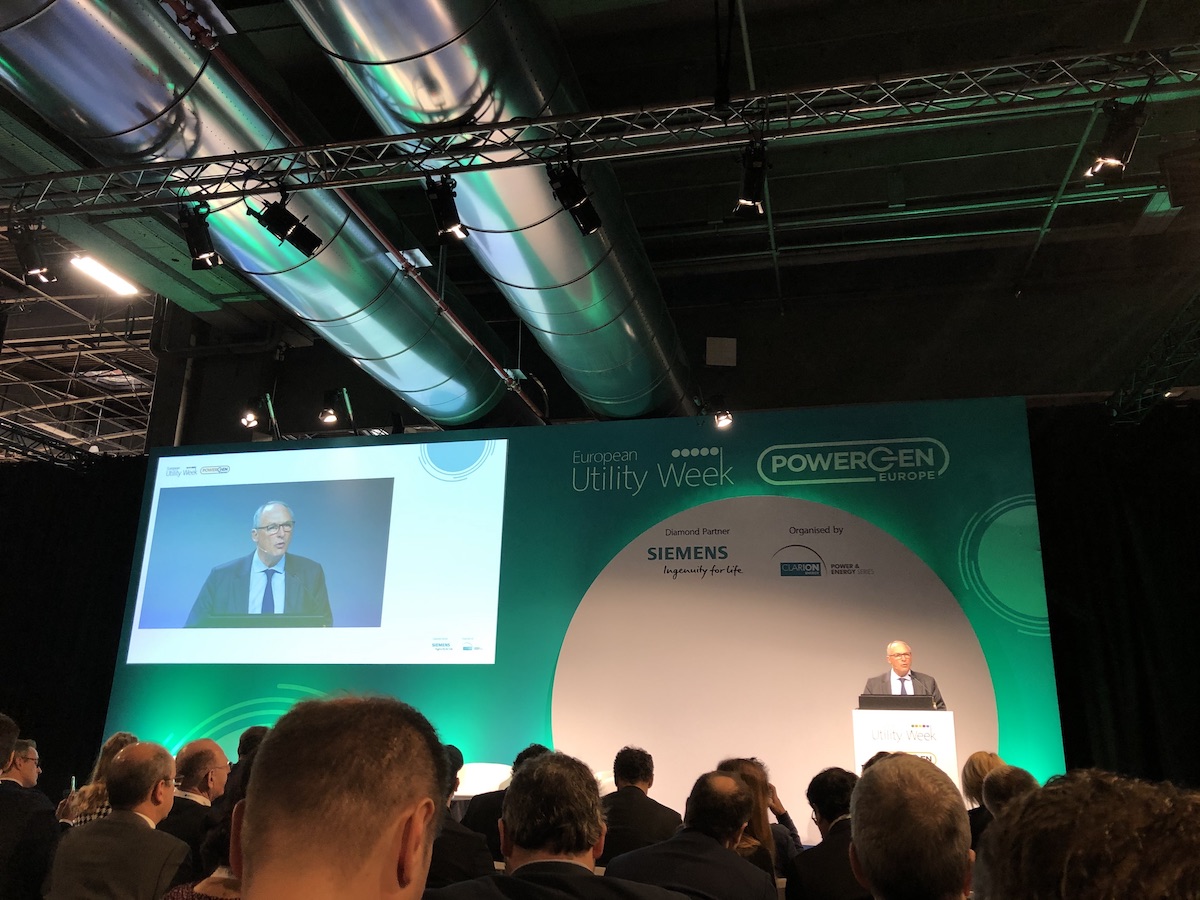 At the kick-off keynote session European Utility Week and POWERGEN Europe in Paris today, speaker after speaker urged industry collaboration and partnerships as the only way that the world will meet its decarbonization goals.

The keynote began with a look at the growth of renewable energy in a speech given by the IRENA director general, Francesco La Camera. He showed via a series of slides the great momentum that renewables are gaining all over the world but said there is still a long way to go.

IRENA estimates $110 trillion will be needed to meet Europe’s 2050 decarbonization goals, an amount that is equivalent to investing about 2 percent of global GDP per year. However, Le Camera said he believes that every dollar invested will result in a return of $3-$7 per dollar invested.

“Join us,” said Le Camera in closing. He urged the industry to collaborate by joining IRENA through which it can share ideas and meet potential new partners.

Enedis chief executive Philippe Monloubou was next to take the stage. He spoke of the industrialization of the energy sector and said he believes it is already underway. He predicted that by 2030 France will have more than 100 GW of renewables and 8 GW of that will be self-consumption. In addition, he said that EU territories will need to be more interconnected in order to enable more energy trading and that the consumer will be the center of the energy transition.

“Everyone must be able to become a player in the energy transition,” he said.

Next, the chief executive of Smart Infrastructure at Siemens, Cedrik Neike, spoke of the urgency of climate change, asking the audience if they felt we are doing enough to combat it. (The majority did not.)

Neike emphasized the importance of tearing down silos between different the energy sectors (transportation, heating/cooling, and electricity) in order to foster collaboration.

“No single company will be able to solve all of those elements,” he said.

He also hinted at a collaboration between Siemens and the government of Canada that will explore using heat as an energy storage medium for large-scale storage.

Start-up consultant Noortje van Heijst was next on the stage. She asked the audience to consider the role that young talent and start-ups can play in the energy transition.

“I believe that startups are the driving force,” she said, adding that investors and leaders of energy companies should pay attention to them. Van Heijst will also be speaking at the Initiate! hub this week.

Echoing van Heijst’s comments was the director of Enel’s Global Infrastructure and Networks Division. He spoke of Enel’s commitment to innovation through its Open Innovability platform, which allows startups to submit ideas to Enel for consideration.

To conclude the speaker presentation portion of the keynote, Mark Gainsborough with Shell New Energies took the stage. Shell New Energies was formed in 2016 and has been investing in and outright purchasing startups for the past few years. Gainsborough mentioned the company’s investments in Sonnen and Limejump as good examples of Shell betting on the future of the clean energy sector.

“For the energy transition, it will take partnerships on a huge scale,” he said, adding that the startups it purchases can take advantage of Shell’s “scale, footprint, and brand.”

He said the partnerships are what bring new opportunities around the world and added that Shell has no intention of slowing down.

“Watch this space,” he said.