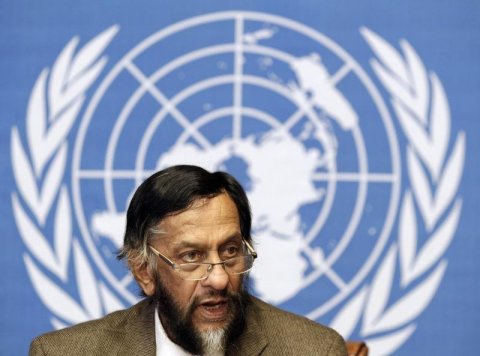 A report from the United Nations Intergovernmental Panel on Climate Change (IPCC) has warned that the world needs to drastically change its energy policy in order to avoid dangerous levels of global warming.

The UN body says the world needs to triple the energy it gets from renewables, nuclear reactors and power plants that use emissions-capture technology in order to keep climate change within safe limits.

“The longer we wait to implement climate policy, the more risky the options we’ll have to take,” Ottmar Edenhofer, a co-chair of the 235 scientists who drafted the report, told Bloomberg. “We need to depart from business as usual, and this departure is a huge technological and institutional challenge.”

The UN said governments must accelerate efforts to build wind farms and solar parks and provide incentives to develop carbon capture and storage technology, or CCS, for fossil-fuel plants by making it more costly to emit carbon. The study aims to guide envoys from 194 nations next year as they devise a new accord to slash greenhouse gases.

The report has huge implications for energy policymakers and the entire global power dynamic. To meet the 2-degree goal, annual spending on fossil fuel plants must drop by $30bn a year by 2030, the panel said. Meanwhile annual expenditure on renewables, nuclear, and carbon capture and storage must rise by $147bn, and spending on energy efficiency measures for transportation, buildings and industry needs to increase by $336 billion, it said.

The researchers said emissions growth accelerated to an average of 2.2 per cent a year for the 2000-2010 period from an annual 1.3 per cent the preceding three decades. That puts in jeopardy the target agreed upon by climate treaty negotiators to stabilize warming since pre-industrial times to below 2 degrees Celsius (3.6 degrees Fahrenheit).

Without extra effort to cut greenhouse gases, current trends may triple their concentration in the atmosphere this century, pushing warming since 1750 from 3.7 degrees Celsius to 4.8 degrees Celsius, according to the report. That would raise the risk of melting glaciers and sea ice, lengthening droughts and heat waves and intensifying storms and flooding.

“This report brings out the need for an unprecedented level of international cooperation,” said IPCC chairman, Rajendra Pachauri (pictured).

Hundreds of scientists and government officials have spent the past week in Berlin editing a draft line-by-line to put it into clearer wording understandable to policy makers. A previous report on the subject had been seized upon for inaccuracies by climate change sceptics so the new study has sought to address that.

“Substantial reductions in emissions would require large changes in investment patterns,” the scientists wrote. A 2-degree scenario would involve “more rapid improvements of energy efficiency, a tripling to nearly a quadrupling of the share of zero- and low-carbon energy supply” by 2050.

Among the businesses that will benefit from the findings are wind turbine makers such as Vestas Wind Systems A/S, solar panel manufacturers including Yingli Green Energy Holding Co. and nuclear reactor makers Areva SA and Toshiba Corp.’s Westinghouse unit.