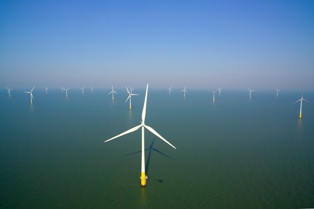 The UK government today unveiled eight renewable energy projects which it is backing under its new Electricity Market Reform structure.

If they all come to fruition, the government says that by 2020 they will provide up to à‚£12bn ($20bn) of private sector investment, create 8500 jobs and could add 4.5 GW of low-carbon electricity to Britain’s energy mix.

The projects ” which comprise offshore wind farms, coal to biomass conversions and a dedicated biomass plant with combined heat and power ” have all been awarded contracts under the Final Investment Decision Enabling for Renewables process, which means they qualify for government support under the Contracts for Difference (CfD) scheme.

Under CfDs, generators and developers receive a fixed payment ” or strike price ” for the electricity they produce for 15 years.

CfDs have been introduced as part of the government’s Electricity Market Reform programme, itself part of the new Energy Act 2013, and today’s announcement marks the first step in the new EMR Contracts for Difference regime.

“By themselves they will bring green jobs and growth across the UK, but they are a significant part of our efforts to give Britain cleaner and more secure energy.

“These are the first investments from our reforms to build the world’s first low carbon electricity market ” reforms which will see competition and markets attract tens of billions of pounds of vital energy investment whilst reducing the costs of clean energy to consumers.”

He added that he expected the UK to generate 30 per cent of its electricity from renewables by 2020 and said that today’s projects would contribute heavily to hitting this target.

Five offshore wind farms are included in the projects: Beatrice (664 MW), in the Outer Moray Firth off Scotland; a 258 MW extension to the existing Burbo Bank (pictured) off Liverpool; a 660 MW extension to Walney wind farm in the Irish Sea off Cumbria; Dudgeon (402 MW) off Norfolk; and the 1200 MW Hornsea 1 in the North Sea off Yorkshire.

The other three projects are a biomass conversion at Drax power plant in Yorkshire; another at Lynemouth power plant in Northumberland; and a dedicated biomass plant with CHP at Teessde.

The starting strike price for the offshore wind farms will be à‚£155/MWh, à‚£125/MWh for dedicated biomass and à‚£105/MWh for the biomass conversions.

“We could see over 100,000 people working in the wind and marine energy sector over the next decade, and government backing here will give the supply chain confidence to invest in the UK, with costs falling as the clean energy industry develops and scales up.”

However, he added that the UK needed “far more onshore and offshore wind projects over the next decade if we’re not to find our energy security threatened, and the UK further exposed to price shocks from imported fossil fuels, so it’s important that the Contracts for Difference regime works for all renewable energy projects, not just those that have secured early contracts”.