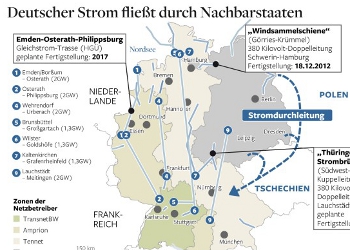 Germany’s neighbours have become increasingly critical of the consequences of the energy transition, or energiewende, on both their national grids and utility performances.

A new study by the German Institute of Applied Ecology (Oeko-Institut) is currently examining the complaints.

Poland, the Czech Republic and Switzerland all point the finger at Germany for what they claim are uncontrolled surges in renewables, which are destabilizing their grids.
In addition they contend that Germany’s behaviour is also reducing the profitability of conventional power firms.

The Institute recently published “Impacts of Germany’s nuclear phase-out on electricity imports and exports” (PDF), a 99-page study that discusses not only German power flows with its eastern neighbors, but also with its neighbors to the west.

This study comes at a time when Poland and the Czech Republic are both openly complaining about Germany using their grids to transport renewable power from northern Germany to southern Germany – because the German grid is allegedly overloaded.

Meanwhile, Switzerland recently argued that it’s conventional power firms were not able to generate as much power as they should because the Swiss grid is also sometimes filled up with German renewable power.

The study also examines why the Netherland has been les vocal, despite the Dutch grid being flooded with inexpensive renewable power, which has offset electricity production from natural gas turbines in the country.