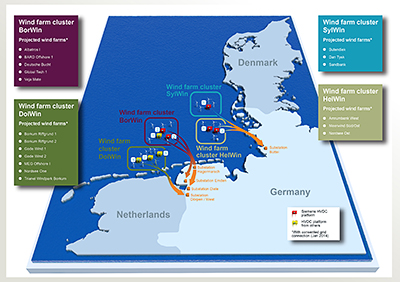 Siemens has been chosen to lead a consortium responsible for constructing and installing an offshore wind connection in the North Sea, off the German coast.

Petrofac, with over 30 years of experience as a leading EPC contractor to the international oil and gas industry, will be responsible for the construction and offshore installation of the project’s platform. Supply and laying of the cables was tendered separately by TenneT and is therefore not part of the consortium’s scope of supply.

This is the fifth order that Siemens has received from the German-Dutch transmission grid operator TenneT for connection of offshore wind farms in the North Sea. “

The scope of supply includes the entire high-voltage equipment of the grid access system as well as the complete onland station. Both converters, which are meant to turn the alternating current into the direct current one and then back again, constitute an essential part of the installation. In addition to this, Siemens supplies two power transformers per station at a rating of about 670 MVA as well as the entire air and gas insulated high-voltage switchgear equipment.

Furthermore, Siemens is in charge of the overall construction works of the onland station. The high-voltage direct current (HVDC) converter modules are going to be designed, manufactured and tested at the Siemens converter factory in the city of Nuremberg. The technology applied here is well-proven and it is already successfully used in four offshore projects by Siemens. The power transformers are also manufactured by Siemens at the factory in Nuremberg.

This 160 kilometers (km) long grid connection will link several wind farms to the mainland. The 155 kilovolt (kV) alternating current supplied by the wind power plants will be transformed into 320 kV direct current on the BorWin3 offshore platform.

A basic principle behind power transmission is: The higher the voltage, the more energy that can be transmitted via a cable and the less the losses. Normally, direct current transmission is implemented in cable links of more than 80 km, as this is usually more economical, and also because transmission of alternating current over such distances and at these high power levels would result in a major portion of the energy being lost without any means of compensation.

The BorWin3 link will transport electrical energy via cable over 130 km at sea and a further 30 km on land to the grid feed-in point in Emden. The direct current will then be converted back into alternating current for further transmission and distribution.

The platform will be designed as a parent platform, equipped with a helipad and crews’ quarters. Siemens will essentially be supplying the HVDC technology for the platform and will be responsible for the construction of the complete HVDC converter station on land. In all, Siemens is now implementing five North Sea grid connection projects for TenneT. Projects to date are: HelWin1 (576 MW) and HelWin2 (690 MW) off of Helgoland, BorWin2 (800 MW) off of Borkum and SylWin1 (864 MW) off of Sylt. Those grid connections are well advanced and are scheduled to take up operation successively between 2014 and 2015.