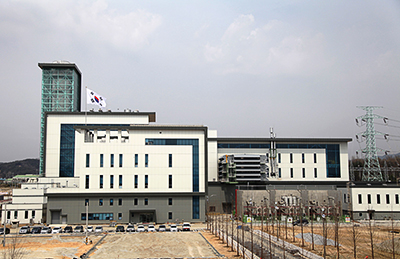 The plant, located in Andong, has capacity of 417 MW and possesses H-class power plant technology with an efficiency of greater than 60 per cent, making it only the second such plant in Asia.

Designed for 250 starts per year, with a startup time of only 30 minutes from standstill to full load, the Andong CCPP is particularly flexible, allowing it to react optimally to the rapidly changing challenges posed by the Korean power market.

The plant is designed as a single-shaft power plant. Consortium leader Siemens was responsible for the turn-key erection of the plant, and supplied the major components – a SGT6-8000H gas turbine, a SST6-5000 steam turbine, a SGen6-2000H generator and a Benson heat recovery steam generator. The SPPA-T3000 I&C system and other auxiliary systems are also part of the package. Furthermore, Siemens has signed a maintenance contract with a term of ten years for the main components.

Siemens also has three additional combined-cycle plants with H-class gas turbines under construction in South Korea with a total capacity of 2,500 MW which are scheduled to commence operation over the course of 2014 and 2015.

In October 2013, Siemens incorporated a new company, Siemens Energy Solutions, in Seoul which will act as its new regional headquarters to serve the Asian and Middle Eastern power plant solutions market. The company is expected to grow its staff to more than 500 employees in 2017.