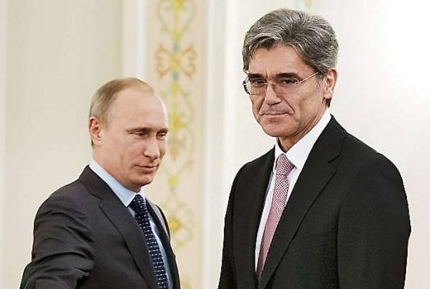 Siemens chief executive Joe Kaeser met with Russian President Vladimir Putin on Wednesday and clearly signalled his company’s intention to carry out its commitments in Russia despite the threat of economic sanctions being carried out by the EU and US.

Russia relies on Siemens (NYSE:à‚ SI) to carry out much of the power infrastructure it is installing as part of the country’s continuing modernisation and Kaeser’s visit to Putin’s Novo-Ogaryovo residence is being seen as a message of reassurance that Siemens will continue to carry out its business, despite governmental pressures over Russia‘s annexation of Crimea.

Siemens said that the company remained committed to its long-term investments in Russia, emphasising that it respected the “primacy of politics”.

“Dialogue is for us an essential part of long-term relationships,” Joe Kaeser, chief executive, later explained to Bild newspaper.

Mr Kaeser’s visit to Russia coincided with a visit by Barack Obama to Brussels where the US president reiterated the west’s opposition to Russia’s annexation of Crimea.

Siemens have not made any statements on the possibility of sanctions and Kaeser did not comment on the situation in Ukraine during the visit.

Germany’s business community is opposed to sanctions against Russia that it fears may harm extensive business and energy ties in the country. Germany is Russia’s biggest European trade partner and its companies have invested around €20bn in Russia.

Pressure has been building on Angela Merkel, chancellor, to consider new measures against Russia in spite of the potential cost to domestic business.

Siemens isn’t the only business finding itself in difficulty as a result of political manouvering. GE (NYSE:à‚ GE) earned $1.7bn of its total $146bn in revenue from Russia in 2013 and has targeted the country as a place where growth can be generated.

GE CEO Jeffrey Immelt had been in Russia earlier in the year and had spoken about GE’s interests in further growing its business in the country, including investment in gas turbine development.

Siemens told Power Engineering International on its present range of business interests in Russia, but a spokesperson said the company does not comment on political developments,

“In Russia, Siemens focuses, in particular, on long-term collaboration in the areas of energy and rail systems. The company is pursuing a localization strategy that includes investments in Russia’s modernization and industrialization. Siemens currently has around 3,000 employees in Russia. The business volume is about €2 billion,” the spokesperson said.
For more European power generation news