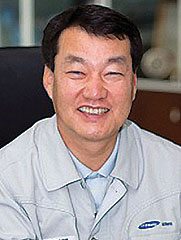 Following the departure of Park Ki-seok, Samsung has named Park Choong-Heum as the new President & CEO at Samsung Engineering, the company has confirmed to Power Engineering International in an emailed statement.

The departure of Park Ki-seok was forced following an accident that killed three workers and injured 12 during a stress test at a water tank facility in Ulsan, South Korea on Friday.

In the statement the company confirmed that “on August 1st, Samsung Engineering President & CEO Park Ki-Seok was removed from his post to take the responsibility for the Ulsan SMP water tank incident.”

Samsung Engineering went on to say that it “deeply regrets the unfortunate incident and offers our sincerest condolences to families of the deceased. We are fully cooperating with the ongoing investigation by the authorities to verify the causes.”

“Samsung is fully committed to the safety and wellbeing of our employees, partners and the local community. We will take all possible preventive measures and strengthen our policies to ensure safety.”

Mr. Choong-heum (pictured) will now take up his new role and depart his previous position as executive vice president of the company.