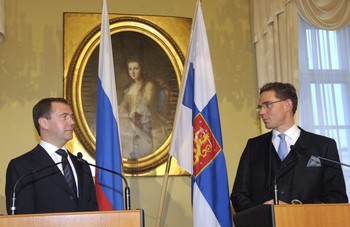 The prospect of Russian involvement in the next Finnish nuclear power plant will be up for discussion when Russian Prime Minister Dmitry Medvedev and his Finnish counterpart Jyrki Katainen meet today (Friday).

Government souces told RIA Novosti that the talks at the Baltic Sea Forum in Saint Petersburg will allow both parties to talk about the construction of the plant at Pyhajoki in northwest Finland.
Fennovoima earlier said it would announce the Pyhajoki NPP construction tender sometime this year. The project cost is estimated at around $5bn to $8bn, according to the Finnish consortium.

Fennovoima is interested in Rosatom’s 1200 MW pressurized water reactor AES-2006. If selected, the design will be updated to meet the newest Finnish safety requirements. Currently Rosatom has orders to construct 19 similar reactors outside of Russia. In addition the company is building 8 reactors in its home country.

The Finns are also in talks with Toshiba in connection with its 1600 MW boiling water reactor EU-ABWR.
For more nuclear power generation news