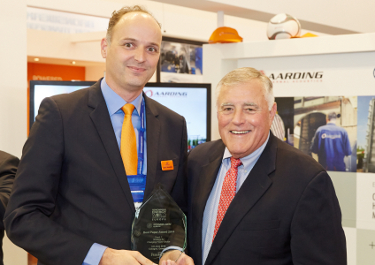 The annual POWER-GEN Europe Best Paper Awards were announced at the closing ceremony of the event in Cologne, Germany on Thursday.

CEO of Pennwell Corporation, Bob Biolchini was on hand to present the prestigious awards. Judges from the expert conference programme Advisory Boards selected the Best Paper Award winner for each POWER-GEN Europe 2014 conference track, based on outstanding concept and content.
For the second year running, Melle Kruisdick, Market Development Director at Wartsila was winner in Track 1: Strategy for a changing power sector, with a paper entitled, ‘Optimal balancing products for cross-border trade in power systems with high shares of renewables.’

Runners-up in that category were Ronald Meijer from DNV Kema who produced a paper on ‘New earning models for conventional generation assets in future energy systems’ while Roberto Bove’s ‘Installed base and flexibility: New realities for the European power sector’ was also recognised.

Track 2 dealt with the area of Low to Zero CO2 Emissions, with Thomas Krause of Hitachi Power Europe emerging the winner for his paper, ‘Upgrade of mills for biomass firing in Denmark.’ Also recognised in that category were Foster Wheeler’s Luca Mancuso and Wartsila Poland’s Adam Rajawski for papers on carbon capture technology advances and gas-based cogeneration respectively.

Gas-Fired Generation encompassed the papers recognised in Track 3 with Alstom Power’s Peter Marx winning for ‘GT26 operational experience under changing market conditions’.
Others to impress in this track were Siemens’ Armin Staedtler for his paper on the advantages of the SGT5-800H for the European market and Wartsila Finland’s Anders Ahnger’s ‘Challenges ahead for modern CHPs in district heating applications.’

Last but by no means least, in the ‘Solutions for Integration’ track, EDP Distribution’s Luis Cunha emerged the winner for his paper, ‘Evora-Inov City’ with Niklas Wagar of Wartsila and Dr Giorgio Dodero of IPG highly commended in the category.

All of these exceptional papers are part of the Conference Proceedings which are available online. Access is confined only to delegates or to those who purchase the access via registration@pennwell.com.