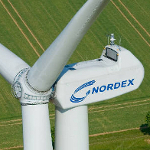 Nordex have announced a profit for the third quarter of this year, but has seen its full year earnings knocked due to ‘unforeseen’ delivery issues.

The German wind turbine manufacturer posted earnings before interest and tax $19.5m in the three months to September 30, ahead of $15 at the same stage last year.

The third quarter also saw a rebound from the $20.8bn Ebit loss it recorded at the half-year stage to June, reports Re-Charge.

Nordex told investors it expects operating profits at the lower end of its target. The company said: “In view of delays in the delivery of externally sourced towers and rotor blades, which caused unforeseen additional expense, Nordex now projects a full-year Ebit margin of around 1 per cent, down from the corridor of 1 per cent-3 per cent previously indicated by the board.”

The company has launched “numerous strategic initiatives” to rectify the supply chain issue.