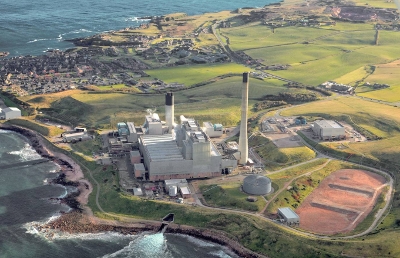 The 780 MW Scottish gas-fired power plant failed to function during testing despite receiving a contract from National Grid to provide backup power for the UK this winter.

The plant, owned by energy giant SSE, was one of three power stations handed a contract last month by National Grid to be paid to guarantee they could fire up if needed.
The emergency plants were selected after a series of power plant closures reduced Britain’s generation capacity to uncomfortably low levels.

The three backup power plants are supposed to guarantee they would be available if required between 6 am and 8 pm on weekdays.

“We are in the process of discussing what did go wrong,” a spokesman for National Grid said.

National Grid has responded, saying: “The reason to do tests is to ensure this kind of thing doesn’t happen when you actually need them.” It added that SSE could face penalty charges if Peterhead “doesn’t function as it should”.

As well as the backup power plants, National Grid has also brought in emergency measures to pay industrial businesses to power down or switch to diesel generators from 4 pm to 8 pm on winter weekdays.

Tim Emrich, CEO of UK Power Reserve told Power Engineering International that the incident highlights the importance of the UK Capacity Market to provide reliable means of ensuring security of supply on the way to a lower-carbon future.

à‚ “Distributed generation portfolios can provide a very flexible, reliable, economic and efficient low carbon alternative to large scale gas fired CCGTs. Distributed Generation helps to both increase supply and reduce demand at peak times with a de-centralised, lower-risk portfolio of small-scale power generation and demand side response through a number of National Grid Balancing Services such as STOR and Fast Reserve,” he said.

“Moreover, smaller-scale sites, distributed around the country are flexible and can produce just as much or as little power as needed, making it a more cost-effective and low-carbon option than bringing online large power stations to meet the shortfall.”