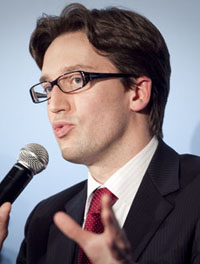 The European Union’s decarbonisation strategy has all the right intentions but it is taking the wrong path to that destination.

That was the view of Fabian Roques, senior director at consultancy IHS CERA, who was speaking at the Plenary session of POWER-GEN Europe and Renewable Energy World Europe.

He told the audience of power sector professionals: “It’s not the end point – it it’s how we get there. It’s about how we define a sustainable trajectory.”

Critical of the Brussels move in pushing renewables on to the system, Mr Roques said he had participated in a study of the European thermal power sector and found that the results indicated the huge losses faced by utilities, costs that were needless, given that Europe had better choices in how to reach its objective.

“We did a plant-by-plant analysis and found that 200 GW of the 220 GW of thermal power sectorin Europe are losing money or barely recovering operation costs.”

“What is best for renewables is to have a sustainable policy, not destroy value. An alternative policy can lead to the same outcome. There is a time element to the industry, and forcing change into the system compromises value. This industry has long lead times.”

Meanwhile, RWE Technology chief executive, Michael Fübi revealed: “From a position where we had a share price of €95 it is now down to €26, so we have lost 75 per cent of its market value.”

Mr Fübi added that the company spent €12bn in power plants that have under present conditions now proved nearly redundant.

“I regret some of that investment. There is too much capacity in the market and we cannot afford to maintain a plant that is used for only a couple of hundred hours a year. It’s cash negative.”

Getting to the nub of what was disagreeable about how politicians were pursuing its clean power agenda, he added, “Decarbonisation is not bad news, its expensive news.”

The plenary session was hosted for the fourth successive year by Stephen Sackur of the BBC’s Hard Talk programme. He posed the challenge to his panel of how utilities should act in an age of uncertainty when companies cannot invest and there is a difficult climate for strategic investment, saying: “Can you convince me there is a way out of this uncertainty?”

Framing a solution to the present afflictions the sector was suffering, Mr Roques advocated the removal of subsidies for renewables and there appeared to be a consensus among the panel that the system’s dynamic needs to be changed to reward fossil-fired power plants for acting as vessels of reserve capacity.

“Renewables need to be subject to the same obligations as the rest of the power generators and we need a market that renumerates flexibility and capacity.” Playing devil’s advocate, Sackur asked the panel of European power sector leaders if they ought to simply “suck it up” as Europe’s politicians had taken a “courageous” stance in driving forward a decarbonised power future.

Andrea Aparo, senior R&D advisor of Ansaldo Energia, responded that “there is a fuzzy boundary between courage and madness” before adding that Brussels needed to have a more united energy strategy if decarbonisation was to be successful

“The clear issue is, are we to accept a clear EU policy and renounce the prerogative of independent states?”

Late in the debate, the role of  nuclear in achieving the strategy was introduced.

Mr Fübi reminded delegates that while nuclear had taken up a 28 per cent share of EU power generation as recently as 2011, Germany as well as Austria had since turned away from nuclear and that tremendous costs involved would make nuclear power generation prohibitive for many countries.Mr. Roques also poured cold water on the prospects of a super grid resolving the European bloc’s problems, asserting that on average it takes France 11 years to build a typical transmission line and a recent line between France and Spain took 25 years to complete.

The plenary session was also broadcast to a worldwide audience, one of whom pondered why the panel hadn’t considered the costs, in global terms, of not decarbonising the power sector. Ms. Aparo responded that it was not industry executives’ role to address that issue.