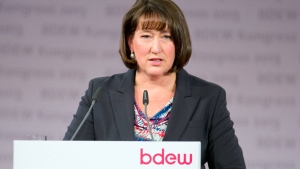 The German energy industry association, BDEW, says that 43 per cent or 32 of the power plants planned for construction in Germany may never come to fruition, due to lack of economic viability.

The association’s managing director, Hildegar Mueller (pictured) said: “Unless there is clarity very soon about the future structure of the market and a relevant capacity market model, the situation for power stations will result in a serious problem for Germany as an industrial location.”

The association says a combination of a lack of clarity about the future structure of energy markets and the lack of profitability for coal- and gas-fired power stations because of competing energy supplies from subsidised renewable power had severely undermined investor confidence.

BDEW said that a year ago, it had only questioned the economic viability of 22 long-term projects and warned that the situation had regressed to the point that unless action was taken to encourage the construction of more power stations to ensure stable supply, energy security issues were inevitable.

The report from BDEW was issued on the first day of the Hanover Trade Fair, when the body traditionally prescribes its solutions for a more effective German energy policy.

It warned that if current plant closure plans were added up with cancellations of new construction, some 13,600 MW of so-called secure load, that runs 24 hours, would be shut by 2022.

Reuters reports that wind and solar energy have been expanding fast but are not secure as they cannot guarantee supply at all times.

It said that on the positive side, nine offshore wind parks were due to come online this year and that the current rate of project completions was still high: five coal-fired and four gas-fired plants would come onstream in 2014 and 2015.

“This must not hide the fact that planning for these units began in the last decade and economic operations of these plants in today’s market are in question,” Mueller said.

Meanwhile, the head of Germany’s main engineering body has warned that caution was required so as not to jeopardise German business interests in Russia.

“It is absolutely clear that there has been a blatant breach of international law. It is also clear that it is necessary to draw the line,” VDMA President Reinhold Festge said at the same trade fair. “But you have to know what you are doing when you continue to escalate, yelling and screaming,” he added.

“This concerns the engineering sector’s fourth-biggest market, and there is no other country that has invested in Russia as massively as Germany,” Festge said.