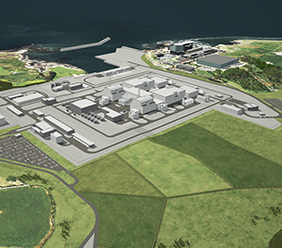 The UK’s Department for Business, Energy and Industrial Strategy (BEIS) has  dismissed newspaper reports from Japan, which claims Prime Minister Theresa May had personally pledged to give UK financial backing to the Wylfa Newydd plant in Anglesey, Wales.

According to Nikkei business daily the British government proposed to arrange all $18.28bn in loans that Hitachi needs to build the nuclear power plant.
The report added that  London has boosted its offer to reduce Hitachi’s financial exposure.

A BEIS spokeswoman said: “We don’t recognise these reports. Nuclear power remains a crucial part of the UK’s energy future but we have always been clear that this must be delivered at the right price for consumers and taxpayers.”

“This principle runs through all our engagement with any new-build developers. These discussions are commercially sensitive and we have no further details at this time.”

Hitachi’s Wylfa Newydd is slated to be the next major nuclear new-build in the UK after the £18bn Hinkley Point C project currently being constructed in Somerset.

In 2015, American engineering giant Bechtel and Japanese firm JGC were chosen by Hitachi’s Wylfa development arm Horizon as the EPC contractor for the scheme. Since then, Hitachi has been locked in discussions with UK government over the level of financial support it is willing to provide.