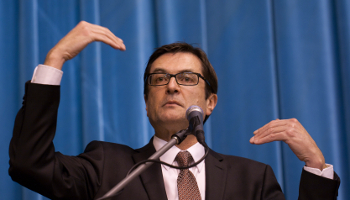 The Australian federal government is to retain its renewable energy target (RET), despite pressure from power companies to reduce it.

Climate Change Minister Greg Combet (pictured) said the target will remain the same, as it ensured certainty for investors.
Referring to a review carried out by the Climate Change Authority, who recommended retention, Mr Combet said reducing the target would do little to ease power prices, while at the same time release an extra 119 million tonnes of greenhouse gas emissions.

“If you’re an investor … in the renewable energy sector you want some certainty about these policy settings,” he told reporters in Canberra.

Australia is aiming for 20 per cent of its electricity supply to come from renewable power by 2020.

Under the scheme a target is set for large-scale renewable projects – such as wind farms – to produce 41,000 GW hours by 2020.