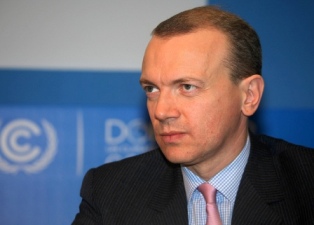 The head of policy at French engineering giant Alstom has backed a report from the International Energy Agency which calls for fresh measures to rekindle action on climate change.

The IEA’s executive director Maria van der Hoeven last week said that “climate change has slipped to the back burner of policy priorities” but she stressed that “the problem is not going away ” quite the opposite”.

She then unveiled four measures which she claimed will “keep climate goals alive without harming economic growth”:

Giles Dickson (pictured), vice-president of policy and advocacy at Alstom, agrees that “measures have to be taken to get us back on track and give us a chance to contain temperature rises” and says the IEA’s four measures are “good for jobs and good for growth”.

He told PEi that à‚ the IEA “has taken a very pragmatic approach. They often talk about long term measures and long term ambition, but this time they have focused on the short-term measures that can ” and need ” to be taken now and that is a positive step.”

He adds that it is particularly encouraging that the IEA is “focusing on measures that can be implemented using today’s technology”.

“They have identified measures that are at least cost neutral ” we would actually go one step further and say that many of the measures could have a positive net economic impact.

“If you take improving the average efficiency of a thermal power plant: that means more efficient electricity generation, which will help reduce electricity costs.”

The IEA’s call for partial phasing-out of fossil fuel subsidies also makes “perfect macro-economic sense” he adds, “so we see this package of measures as being good for jobs and good for growth”.

He says that the IEA is “leaning at an open door” as many governments around the world are already taking steps to reduce their fossil fuel subsidies and the efficiency of their coal-fired power plant“.

In many respect, he says that China ” which has today introduced its first emissions trading scheme ” is leading the way, as it has already closed 70 GW of inefficient coal-fired capacity.

“The average thermal efficiency of coal-fired power stations in China is higher today than it is in Europe and in North America,” he stresses.

Dickson concedes that “inevitably all four of these measures are going to be easier or more difficult in certain jurisdictions than they are in others”, but he points out that they are measures “that can all be implemented using today’s technology and make economic sense”.

And he adds that any country acting upon the IEA report will see beneficial knock-on effects.

“It’s not just about these four specific measures ” there are many other things that governments may be encouraged to look at even though they are not explicitly spelt out in the report.

How optimistic is he that these measures will be embraced and acted on?

“There is economic self-interest here for governments around the world to be acting on this report and be going in the direction of these measures. So if governments, either collectively or individually, act on these measures, then there is grounds for optimism.”