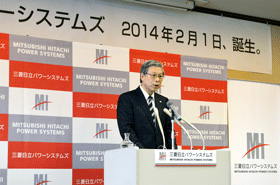 Mitsubishi-Hitachi Power Systems (MHPS) have made no secret of their ambitions for greater influence in the power generation sector and yesterday backed up that rhetoric by announcing its interest in joining forces with Siemens Energy to bid for Alstom.

Since the board of Alstom accepted GE’s $16.9bn offer in April, there has been much behind the scenes discussions involving the French government and competing bidders. Now the narrative has taken a new twist.

On Wednesday, MHPS’s controlling shareholder, Mitsubishi Heavy Industries, announced that it was looking to join Germany-based Siemens in a bid to acquire Alstom’s power systems assets.

GE and Siemens each earn about $20bn a year in energy-system revenues and Alstom earns more than $10bn; whichever group were to seize the Alstom business would become more than twice as big as MHPS, according to the Financial Times.

When the enterprise formed in February its President Takato Nishizawa had expressed the objective that MHPS would seek to become the global number one so faced with the damage to that ambition a successful GE move would represent, the company has decided to act.

GE has the biggest share of the world market for the largest-scale gas turbines – about 45 per cent – in which Mitsubishi also specialises. If GE were to buy the Alstom business, its share would grow to more than half, while MHPS languished at 20 per cent.

Joining forces with Siemens would further MHPS’s ambitions to expand outside of Asia, where it now makes more of its sales.

It remains unclear how much money Mitsubishi would contribute to a joint bid with Siemens, although Japan’s Nikkei newspaper reported on Thursday that they were planning to offer around $9.8bn – a bid that Hitachi indicated it would support and potentially join in.

Siemens and Mitsubishi have said they will give more details by Monday along with a final decision on whether to go ahead with an offer.