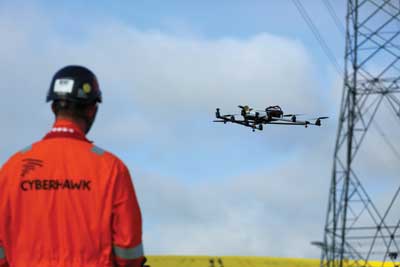 The use of remotely operated aerial vehicles for asset inspections is becoming increasingly widespread in the utilities sector, writes Sally Wallis

Also known as drones, the advantages of remotely operated aerial vehicles (ROAVs) for improved safety, accuracy and cost are being quickly recognized by the power industry.

The superior inspection method does have its drawbacks, however: ROAV technology produces significant volumes of high resolution image data, volumes that are simply too large for the IT capacities of most utility companies. Another concern has been the ability to analyze the collected data in an intelligent and user-friendly manner, so that usable information is produced for decision-making purposes, rather than an overwhelming amount of ‘dumb’ raw data.

In response to these challenges, Scottish remote aerial inspection company Cyberhawk Innovations has introduced a new way of delivering results to customers. The company has developed an end-to-end tower inspection solution coupled with a cloud-based asset management software called iHawk.

Established in 2008, Cyberhawk created the ROAV inspection industry by combining ROAVs, highly-skilled pilots and engineering experts to provide close-up inspections of hard-to-reach live assets. The firm has gone on to conduct surveys on power stations, wind farms, oil and gas sites and electricity networks throughout Europe, the Middle East and Asia.

Developed in accordance with each client’s requirements, iHawk can be accessed on any device with an internet connection and web browser, providing an easy-to-use and intuitive approach to managing inspection and survey data.

Cyberhawk has also developed an end-to-end solution for the inspection of transmission and distribution towers. The process starts by creating a defect standard manual that is pre-agreed with the client. This is then used to create a detailed ground and air data collection plan that ensures every tower is inspected consistently. The inspection is then completed on-site by inspection engineers and pilots. Back in the office, this data is categorized using bespoke software and a governance process using Cyberhawk’s industry expert.

Reporting on towers is presented in the form of a ‘traffic light’ condition rating matrix, which highlights the condition of each part of the structure.

Clicking through each traffic light or tower pin allows the operator to view the actual images behind the condition rating, which can also be output to Excel.

This traffic light system creates a condition matrix for any inspected power line, allowing an instant visual representation of asset health with the ability to easily identify common problems in both components and towers. Historical information can also be accessed and reviewed so that the condition of individual components can be seen over time, providing a major advantage for documenting rates of change.

The ROAV inspection method and the iHawk platform thus combine to provide a high quality photographic record of each tower’s condition, together with accurate defect classification.

Cyberhawk also uses ROAVs to conduct land surveys. With the ability to survey over 100 ha in a single day, thousands of high-definition, geo-referenced aerial photographs are routinely captured on every assignment. By contrast, a traditional land-based topographical survey might cover 10 per cent of the area of an ROAV survey in the same timescale, without offering the benefit of high-definition images of the site.

Using advanced photogrammetric techniques, this imagery is then used to generate accurate and detailed digital elevation models (DEM) and orthophotos, which are aerial photos geometrically corrected so that the scale is uniform. The photo has the same lack of distortion as a map. This is different from an uncorrected aerial photograph where perspective distorts the spatial relationships between points.

The accuracy of the survey information is in the region of 100 mm vertically and 50 mm horizontally depending on the required resolution of the images and the number of ground control points. This resolution is sufficient for most utilities’ projects.

In a recent project in southwest Scotland, Cyberhawk was selected as the best approach for the aerial inspection of a proposed wind farm site, based on the time-saving benefits, reduced risks and the quality of data produced by the ROAV technology. The objective was to provide data to assist with the planning, design and construction of the site, which covered over 400 ha of moorland and bog with limited ground access.

The survey delivered highly detailed, geo-referenced orthophotos and an accurate DEM, and also included some additional ground survey information, such as culvert levels using GPS equipment. The orthophotos revealed previously hidden detail, including a watercourse that was not present on maps of the area. The combination of detailed topographic information together with vertical and oblique photography of a proposed site provides better data to allow for better decisions.

Once the data obtained is published to iHawk, projects can be viewed individually by selecting the appropriate pin. Orthopohotos and Cyberhawk imagery are layered over Google Maps imagery which can then be used to assess a site, or monitor construction progress over time. Panoramic images and 360o sphericals are also visible in iHawk to complement the orthophoto and elevation information, giving Cyberhawk’s clients the ability to navigate around a site in the air and on the ground, similar to the technology used in Google Street View.

iHawk’s applications vary from client to client and across the utilities, renewables and oil and gas sectors. A bespoke solution for each client is commonplace, which often includes inspection data from other sources, attaching reports or manuals to asset locations, and delivering volumetric analysis reports.

Remote aerial surveys have come a long way since Cyberhawk’s conception in 2008. Many energy and oil & gas companies now consider ROAV technologies as best practice, having incorporated the methodology into their routine inspection policies.

The combination of reduced working at height, reduction of site visits and the opportunity to obtain more detailed, accurate information has resulted in a step improvement in inspection regimes across the utilities, renewables and oil & gas sectors.

With the introduction of iHawk comes the next big breakthrough – the creation of meaningful inspection data that accelerates decision-making throughout these markets.