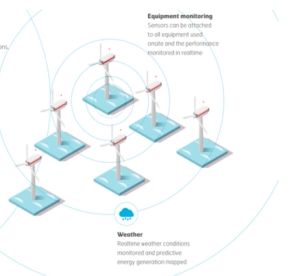 While a majority of energy companies are in the process of deploying or developing Internet of Things (IoT)-based solutions in order to boost their efficiency, low internet connectivity rates are preventing them from realizing the full benefits, new research claims.

For a new reportà‚ titled The Future of IoT in Enterprise ” 2017, British satellite communications firm Inmarsat surveyed 100 large energy firms worldwide. Of the respondents, 21 per cent of companies have already fully deployed IoT-based solutions, while 33 per cent have partially deployed them and 82 per cent plan to do so within the next two years.

However, 54 per cent cited connectivity as the main challenge when deploying IoT, as compared with the 35 per cent that put skills at the top of the barriers list and the 27 per cent citing cyber security.

Indeed, 24 per cent of respondents said connectivity issues were threatening to derail their IoT projects before they began.

Chuck Moseley, senior director for energy with Inmarsat Enterprise, said: “High-speed connectivity is critical to a successful and profitable IoT solution, to ensure the collection and transmission of high volumes of valuable data from sensors for analysis.

Companies “can also monitor for downtime, unusual behaviour or even accidental leaks, putting them in a stronger position to take pre-emptive action.

“Energy companies who want to use IoT in this way need to have a constant, uninterrupted stream of data to make informed decisions about their operations,” he added, “but to achieve that you need access to a robust, reliable communications network.”

Of the IoT solutions already in place, around 75 per cent of respondents said their firm had deployed energy consumption monitoring tools, 65 per cent had switched to smart monitoring of asset levels, just under 50 per cent had deployed business process automation, and 13 per cent now use smart security management.

In terms of cybersecurity, 75 per cent of respondents agreed that they needed to improve their process to protect against attacks and 59 per cent believed their company could be doing more, while 53 per cent said they will need to rethink their approach to data security and make significant investments to meet IoT security requirements.à‚

However, 47 per cent of firms said they currently lack the skills necessary to implement IoT solutions and 43 per cent said they plan to use an external provider where possible.à‚ In addition, 22 per cent did not believe their board understands IoT and thus would limit their potential to take cyber security measures.

Smarter energy for a smarter world