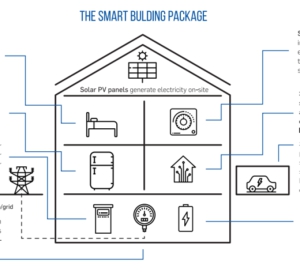 Trade group SolarPower Europe says its report, titled Digitalization & Solar and published this week, is the first to examine the intersection of solar PV and digitalization and to look at how new digital technology can be applied to the solar sector.

Big data analytics, the internet of things, robotics and blockchain are among the digital technologies the report found can create new solar business models and improve existing ones.

In the new business models category, digital technologies could allow residential and commercial PV system installers to offer solar energy as a service, with new products such as aggregation services based on remote controllability, sensor-based operation & maintenance services for smaller-scale installations, energy audits based on consumption data, and new kinds of financing such as smart meter-based ‘zero-down’ power purchase agreements. In addition, blockchain technology can enable peer-to-peer solar trading.

The main driver for decentralized solar is seen to be smart building technology, which itself is also driven by the growth of the solar market. And smart building energy management systems are seen as a way to increase on-site power consumption.

For installers and system designers, digital technologies could reduce costs through using satellite imaging, 3D LiDAR and remote design software to assess a rooftop’s solar potential rather than sending an engineer to the site. Non-engineers could also use software to design and optimize PV installations, further reducing costs.

Professor Bernd Engel, leader of the SolarPower Europe Digitalization Task Force and representative of the SMA Solar Technology Board for grid integration, said digitalization represnts “a major opportunity for solar, not least because it is a means of integrating more PV into the grid, gaining system-wide benefits and new revenues for solar installations.”