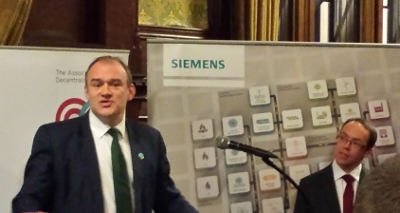 The Association for Decentralised Energy in the UK has announced that former government energy secretary,Sir Ed Davey and James Heappey MP have been announced as vice-presidents of the organisation.

The announcement was made at the Association’s Annual General Meeting, and Heat Conference, a unanimous vote by members.

Sir Ed was the Secretary of State from 2012 until 2015. The ADE was delighted to have him deliver a keynote address at the launch of the Association’s new name in the House of Commons in January 2015. Sir Ed is also the Chairman of Mongoose Energy, a small community energy generation company.

James Heappey MP has been the Member of Parliament for the Wells Constituency since May 2015 and was a member of the Energy and Climate Change Committee until its abolition in October 2016. The ADE was delighted to welcome Heappey as a speaker at the launch of the Association’s Flexibility on Demand report in July 2016.

ADE Director Dr Tim Rotheray said: “It is wonderful to welcome such key political figures as vice presidents of the association. “At a time of great political change, it is more important than ever that the ADE understands the importance of how this sector is perceived across the political spectrum and the addition of these two vice presidents will enable us to represent our members’ needs better.”

Sir Ed said: “I’ve long been a champion of decentralised energy solutions and I am delighted to be supporting the work of the ADE as they push for an energy system better suited to users and local communities.

“The leadership role of the ADE in the challenge to decarbonise heat across our economy – from homes to businesses -à‚  is a key reason for me joining them, as the country thinks through the different options for this huge task.”

James Heappey MP said: “The digital revolution gives us an opportunity to engage more energy users in the system. I am delighted to be working with the ADE as they raise the profile of the key opportunities that exist within the decentralised energy sector.”