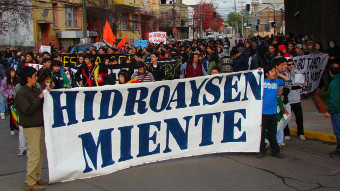 The news story of the year in Chile’s energy plans was undoubtedly the cancellation of the HidroAysen megaproject, which aimed to build five huge hydropower stations able to produce over 2700 MW.

Protests from environmental groups and doubts about the project’s viability led President Michelle Bachelet, who took office in March 2014 after serving as head of state between 2006 and 2010, to cancel it. The plans for HidroAysen had been approved by Sebastian Piñera’s 2010-2014 administration.

Despite the megaproject’s suspension, Chile’s Patagonia region is rich in water resources and will surely be a place for new hydropower plans. The Inter Press Service (IPS) has highlighted the Rio Cuervo station, a project that also faces opposition from environmental groups and the local populace. The plant will be built in an uninhabited area near the Yulton lake and is expected to solve the energy supply troubles that have been affecting this part of the country for decades.

This goal has been called into question by experts such as ecologist Peter Hartmann, co-ordinator of the Aysen Life Reserve citizens’ coalition. Hartmann told Tierramerica that the Rio Cuervo project is “much less viable than HidroAysen, because of environmental and technical reasons and risks”. Those who oppose the plant’s construction say  it is a bargaining chip after the government cancelled HidroAysen.

The Rio Cuervo project will be developed by Energia Austral, a joint venture between Swiss Glencore – which owns a 66 per cent stake – and Australia’s Origin Energy with 34 per cent. If this hydropower plant is built, it will provide 640 MW of installed capacity.

Among the complications surrounding Rio Cuervo’s development is its proposed location. The area is environmentally risky, as it is near a geological fault zone that features active volcanoes. Despite this, the constructing companies assure that the plant will be “safe enough” in the case of natural phenomena such as earthquakes and volcanic eruptions.

Despite the risks it faces, Rio Cuervo is going ahead. An article by Pulso claimed that among its new features will be a transmission line to connect the power stations with the Central Interconnected System (SIC), one of the country’s main grids. The line could follow either an undersea or an aerial route, but it is certain that a part of the transmission line will run under the sea.

The Rio Cuervo project has won environmental permission from the energy authorities, but approval from Chile’s courts is still pending. Environmental groups opposed to the project’s construction filed an appeal in the Coyhaique court; that appeal was dismissed. This led to a further appeal to the Supreme Court, which is currently awaiting a decision.

Energia Austral’s general manager Alberto Quiñones is attempting to smooth things out with those who oppose the Cuervo project. As a result, over the last several months officials from the joint venture have contacted the mayors of 10 municipalities as well as indigenous communities, artisanal fishermen, salmon fisheries and NGOs to ask for their point of view.

Meanwhile, Energia Austral has conducted bathymetry and seismic profile studies. The route to be followed by the transmission line will avoid crossing the Tic Toc Marine Park area whether the line is mainly undersea or aerial. If the line is undersea, the type of cable used would have about a 500 kV voltage – a standard cable that needs to use high voltage direct current (HVDC) technology.

Digital news provider El Dinamo said the Chilean Senate Environment Committee advised that the Aysen region should get its electric supply from small hydropower plants. Senator Patricio Walker, who represents the region, has announced that auctions will be held in 2016 to open electricity generation to “other companies” and ensure that generation, distribution and transmission are not controlled by a single party, meaning the Saesa Group.