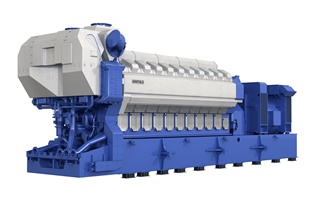 The order is from Umm Al-Qura Cement Company and is for a 47 MW plant in the mountain desert close to Taif city. The contract will take Wärtsilä’s installed power plant capacity in Saudi Arabia to more than 1600 MW.

The plant will power one Umm Al-Qura’s cement factories which operates in extreme conditions of temperatures up to 50 degrees Celsius and at an altitude above 1000 metres.

Wärtsilä will supply five of its 20-cylinder 32TS engines, a new two-stage turbocharged version of the company’s 32 series. The equipment will be fast-track delivered by February 2015 and the project will enter commercial operation by October that year.

This new engine is designed to operate in extreme conditions, such as high ambient temperatures and altitudes. Wärtsilä said the new version “delivers reduced fuel consumption while complying with the World Bank Environment, Health and Safety guidelines for NOx emissions“.

Lars-àƒ…ke Kjell, regional director at Wärtsilä Power Plants, said: “This engine is tailor-made for hot conditions. That’s why we call it the ‘sauna’ engine. It is a result of our commitment to the extensive and long term development work of engine technology.”

He added: “The Umm Al-Qura contract strengthens our leading position in Saudi Arabia. Wärtsilä already supplies four out of five power installations in the cement industry in the country.”