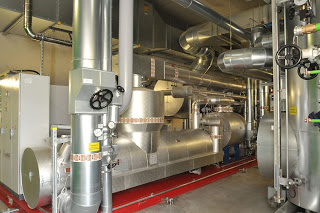 The town of Kempen in Germany possesses one of the world’s most advanced cogeneration plants, and the installation of a particular sensor is helping to maintain that credential.

Cylinder pressure sensors from IMES GmbH, Kaufbeuren, Germany, and its CMS Combustion Monitoring System for permanent on-engine installation are playing a vital role at the plant in North Rhine Westphalia.

The CPS-01 sensors and CMS system acquire cylinder pressure data from the plant’s16 cylinder, MWM type TBG 632 V16 lean burn gas engine. The engine is rated 3535 kW electrical at 1000 rpm and supplies a roughly equivalent amount of thermal energy to the plant’s consumers, depending on priorities.

The cylinder pressure data from the sensors is processed in the CMS, and, via the CMS’ CAN-Bus interface, can be transmitted to the engine’s electronic controller. In the controller it can be used for diagnostics and service planning, detecting combustion knocking and misfiring and, importantly, as a source of feedback values for closed loop engine control based on cylinder pressure.

With knock and misfire detection in particular, the lean burn gas engine can be operated at maximised output and minimized fuel consumption in the so-called “window” between the fuel-to-air ratios which can cause knocking due to an over rich air/gas mixture detonating on the compression stroke under compression heating and incomplete ignition when the mixture is too lean to support satisfactory combustion.