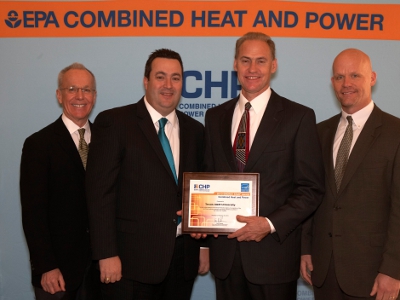 Image courtesty of US EPA

Texas A&M University was a recipient for installation on campus of a combined heat and power system that requires only 33 to 50 percent of the energy consumed in a typical off-campus power plant.

“Through the recovery of otherwise-wasted energy to provide heating, cooling and domestic hot water to campus facilities, Texas A&M has demonstrated exceptional leadership in energy use and management,” said Gary McNeil, who heads the CHP Partnership Program in EPA’s Climate Protection Partnership Division.

“Moreover, by generating electricity on site, the CHP system displaces grid-supplied power, increasing the reliability of the energy supply while reducing demands on existing transmission and distribution infrastructure.”