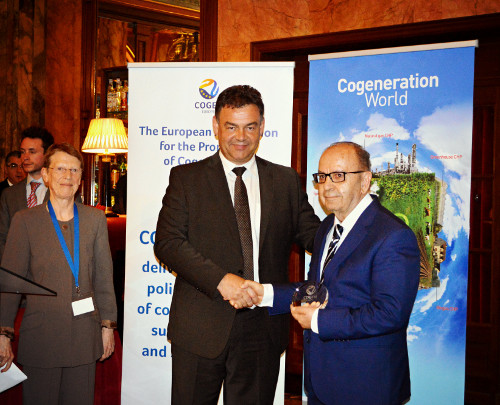 Each year, trade body COGEN Europe recognises those individuals and companies who have contributed most to the EU’s cogeneration sector through outstanding performance and achievement in developing, applying and promoting the technology. At this year’s annual conference in Brussels (19-20 May), COSPP was on hand for the awards presentation by Dr Fiona Riddoch, head of COGEN Europe.

Ozkan Agis of TURKOTED receives his award from Bert de Colvenaer of the Fuel Cell and Hydrogen Joint Undertaking, while Dr Fiona Riddoch of COGEN Europe looks on

The Policy Development Award, given to a European member state for significant improvement in combined heat and power (CHP) policy, was won this year by Italy for its Titoli di Efficienza Energetica/ Certificati Bianchi (White Certificate) scheme, run by the Ministry of Economic Development and granted to highly efficient industries.

Riddoch said the scheme has been a great success in promoting CHP among other energy efficiency measures in Italy’s industrial sector, as evidenced by the fact that demand for certificates for CHP has grown from 2% of all certificates in 2008 to 51% in 2014. ‘The careful planning and phased introduction of the scheme in Italy has served to build confidence in the scheme and its continuity in a way that is absent from other CHP support schemes,’ she noted – a point that was borne out by many of the conference presentations from various member states.

The Market Development Award, given for work which has significantly improved, increased or promoted the market for cogeneration in an important way, was won this year by Markus Seidel, Product Manager at German firm EWE, for development of Europe’s micro-CHP market.

Riddoch said EWE has been one of Europe’s most engaged companies in supporting micro-CHP technologies for over 10 years, and is committed to seeing micro-CHP play a central role in the EU energy system. The first company to launch a micro-CHP demonstration programme in Europe, EWE has demonstrated the highest number of fuel cells on the EU market by far.

With its Callux and FuelCell @Home field trials, for which Seidel acts as project leader, EWE ‘has made a significant contribution to ensuring that micro-CHP fuel cells are ready for market in Germany today,’ Riddoch concluded, as well as being committed to helping establish a robust and supportive policy framework for micro-CHP in Germany and in Europe.

The Technology and Innovation Award, given to projects or technological developments that break new ground for cogeneration, went to RWE Innogy UK for its 65 MW biomass CHP plant in Markinch, Scotland.  The largest biomass CHP plant in the UK, Markinch can provide 120 tonnes of industrial steam per hour, plus enough electricity to power 45,000 households. Its steam was used by paper-making firm Tullis Russell until that company recently went into administration. Nevertheless, Riddoch said, Markinch’s success ‘paves the way for future large-scale renewable CHP projects’.

The final award of the evening, the Lifetime Achievement Award, is given on special occasions to individuals in recognition of their outstanding service over many years to Europe’s cogeneration industry. This year the award went to Ozkan Agis, founder of TURKOTED, the Turkish Cogeneration and Clean Energy Technologies Association.

A pioneer in Turkey’s cogeneration sector since the 1990s, Agis has ‘worked tirelessly in support of cogeneration on every level and platform’ in Turkey and in Europe, Riddoch said, noting to much applause that ‘everyone at COGEN Europe would like to place on record their admiration and gratitude for his efforts to further the cause of CHP’.

Agis founded TURKOTED in 1998, handing over the leadership to his successor, Yayvuz Aydin, in 2014. On accepting the award, he said cogeneration had been more than a hobby for the past 20 years; it had been like ‘his baby’ and he had been proud to watch it grow up in Turkey. He also made a surprise announcement: he is retiring this year, at 80. His enthusiasm will be missed!