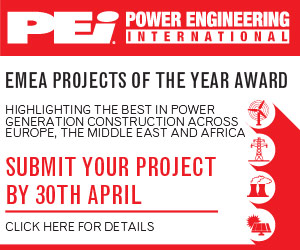 Power Engineering International has launched the EMEA Projects of the Year, which will seek to highlight the best in power plant construction across Europe, the Middle East and Africa.

Hosted by Power Engineering International, the awards will be presented at the Gala VIP Dinner at POWER-GEN Europe in Amsterdam on the evening of Tuesday, June 9.

There are four Awards Categories:

·         Large-scale gas turbine-based projects, including refurbishments and retrofits, as well as new projects;

·         Large-scale gas engine-based projects, including refurbishments and retrofits, as well as new projects;

Each nomination is judged by a panel of independent industry experts and based on the following criteria: Technological innovation; Logistical challenges in developing the project; Capacity; and Community impact.

Submissions must relate to a project conducted in Europe, the Middle East or Africa ONLY.  To enter, click here: #