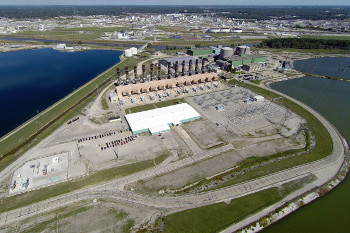 According to the Midland Daily News, workers at the Midland Cogeneration Venture (MCV) in the northern state of Michigan were “thrilled” when the falcons returned this year to nest, after hatching three chicks in an opening in the turbine building last year.

According to the paper, peregrine falcons mate for life and are known to nest in tall buildings. If their breeding season is successful, they often return to the same site the following year.

The combined-cycle MCV plant (pictured), which came online in 1990, produces 1633 MWe and 1.5 million pounds of process steam. Its power is supplied to customers in Michigan and other mid-continent states through a power purchase agreement with utility Consumers Energy, while the process steam is used by nearby chemical production companies including Dow Corning.

The plant features a 356-ha cooling pond which remains unfrozen during the winter months despite the region’s sub-zero temperatures, where other North American wildlife including deer, foxes, woodchucks, owls and bald eagles are regularly spotted.