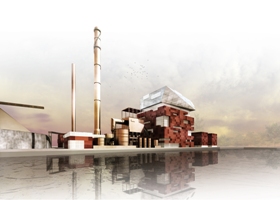 A proposed biomass-fired combined heat and power (CHP) plant is slated to be the Green Investment Bank‘s first investment in Scotland.

The GBP465m ($710m) CHP project, which will be developed by Forth Energy at the Port of Grangemouth, received approval from the Scottish Government earlier this month.

Forth Energy is a joint venture between Forth Ports Ltd and SSE plc.

The CHP plant (artist’s impression pictured) will use sustainably-sourced wood fuel, primarily from overseas, and will have the capacity to generate 120 MW of electricity and 200 MW of heat.

The electricity will feed into the national grid, while the heat will be supplied to industrial users in the surrounding area, which include chemical and oil refining facilities.

It is anticipated that the cogen plant will take three years to build, following a year’s detailed design and engineering, and could become operational by 2017.

This week, the Green Investment Bank published its first annual report to coincide with its Annual Review meeting, which was held in Edinburgh on Tuesday.

According to Rob Cormie, the bank’s operations director, its broad project pipeline “includes an awful lot of Scottish deals”, some of which could come to fruition over the next 12 months, reports The Herald.