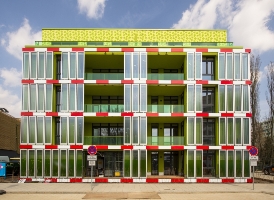 The first house in the world to generate its own energy using a unique ‘bio-skin’ through the cultivation of micro-algae made its debut at the recent International Building Exhibition IBA Hamburg in Germany.

The five-storey Bio Intelligent Quotient (BIQ) House has a bioreactor facade, comprising a vertical algae farm with an integrated bioreactor, turning the building into a Plus Energy House that can supply renewable energy to the building’s residents and the surrounding district.

The micro-algae are cultivated in 129 transparent glass panels, individually measuring 2.5 x 0.7 metres, which make up the house’s bio-skin. While these panels are used to produce energy, they also regulate light and provide shade.

Described as a ‘holistic energy concept’, the BIQ building draws all of the energy needed to generate both electricity and heat from renewable sources.

The building is able to generate energy using the algae biomass harvested from its own facade. Moreover, the facade collects energy by absorbing the light that is not used by the algae and heat generation – similar to a solar thermal unit – and is then either used directly for hot water and heating, or can be cached for later use in the ground using borehole heat exchangers – 80 metre-deep holes filled with brine.

This remarkably sustainable energy concept is thus capable of creating a cycle of solar and geothermal energy, while also integrating a condensing boiler, local heat, and the capture of biomass using the bioreactor facade.