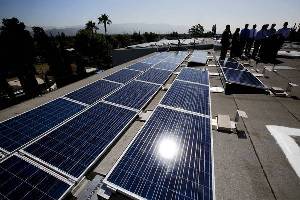 In Los Angeles earlier this week, rows of solar panels atop a North Hollywood apartment complex began producing energy, marking the completion of the first project in what is claimed is the US’ biggest urban rooftop solar programme.

The goal of the effort is to generate 150 MW of solar electricity, or enough to power about 30,000 homes.

The first project has an 84 kW installed capacity and is located on the roof of Oxnard Plaza, an 80-unit apartment building (pictured).

The Los Angeles Business Council, which developed the programme, hopes to attract investments totaling $500m from a growing list of companies that want to invest in LA’s push to go green by setting up large clusters of rooftop solar panels.

“It is really a no-brainer,” said Christian Wentzel, chief executive of Solar Provider Group, which installed the North Hollywood panels.

Long-term contracts with the LADWP cemented the Los Angeles-based company’s plans to invest $50m in 17 projects.

Clean LA Solar serves as part of the city’s answer to the state mandate to generate 33% of electricity using renewable sources by 2020.

Clean LA Solar proponents have their sights set high, aiming to expand the initial 150 MW goal over the next few years to 600 MW.