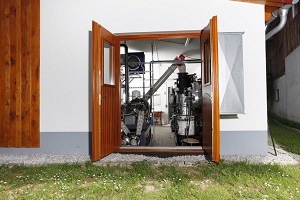 Since 2011, an energy self-sufficient village in Germany has generated 1500 MWh and 3600 MWth with a biomass-based combined heat and power (CHP) system. à‚

The system from Lower Bavaria-based biomass CHP specialist Spanner Re2 supplies the Bioenergiedorf (Bioenergy Village) Engelsberg in the Bavarian municipality of Lauterhofen. The installation includes a wood gasifier and runs on locally sourced wood chips.

According to Spanner Re2, the village has featured a wood chip heating plant since 2006. But “our wish was to generate not only heat but also electricity from wood,” said Mayor Ludwig Lang and Willi Locker Baumamt, director of the market town of Lauterhofen.

In 2011 the village invested in the current wood gasifier, which then-mayor Michael Gottschalk said “fits exactly with us in terms of its output of around 30 kW electrical and 70 kW heat.”

The wood gasifier is designed to cover the basic heat requirements of the community and, together with the 320 kW woodchip heating system, supplies a 1500-metre district heating network ” built by local volunteers ” connecting 27 of the community’s 30 houses.

The waste heat from the gasifier is also used to dry the wood chips via a perforated sheet structure. Around 1200 cubic metres of woodchips are used per year, sourced from the surrounding area.

The old reserve oil heating system has not been used since the implementation of the combination of wood gasifier and woodchip boiler, the press statement said.

The village’s yearly electricity consumption amounts to around 100 MWh. The CHP plant generates more than twice this amount, with the excess fed into the public power grid to generate income for the village under the Renewable Energy Sources Act.

“Engelsberg leads by example that sustainable energy production is both ecologically and economically attractive,” Spanner Re2 said. “In addition, the value added in comparison to fossil-generated energy remains with the Engelsberg concept in the region.”