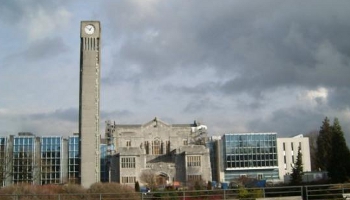 GE, Nexterra and the University of British Columbia (UBC) have combined to produce the first renewable waste combined heat and power system in North America.

The system involves taking wood fuel and converting it to synthetic gas, which is burned to produce heat. GE asked Nexterra to produce a syngas that burns cleanly enough to fuel their Jenbacher high-efficiency internal combustion engines, and that is the core process at the centre of the facility.

Combining Nexterra’s proprietary gasification and syngas conditioning process with the Jenbacher creates a system capable of producing both heat and electricity.

Nexterra invested four years at its facility in Kamloops, developing a way to crack tars from syngas. After more than 5,000 hours of successful small-scale trials, GE and Nexterra approached UBC to host a larger-scale demonstration project.

Dubbed the Bioenergy Research and Demonstration Facility, the equipment is housed in a solid wood building on UBC’s Vancouver campus. Fuelled by renewable syngas, the Jenbacher can generate 2 MW of electricity and 3 MW of thermal energy, enough to displace up to 12% of UBC’s natural gas consumption.

GE is now working with Nexterra to explore the use of syngas from other renewable sources, such as biosolids from sewage treatment plants, to fuel the Jenbacher.