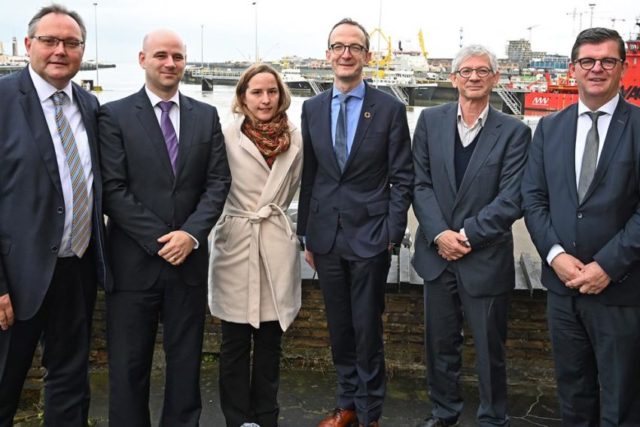 The Port of Ostend, DEME Concessions and PMV are once again joining forces to boost the energy transition in Flanders. Their partnership will result in the ambitious project: HYPORT Ostend, the green hydrogen plant in Ostend that will result in a CO2 reduction of around 500,000 to 1,000,000 tonnes per year.

HYPORT Oostende will make an important contribution to achieving the Belgian and European climate objectives.

The planned location is in the Plassendale 1 port area and the project will be fully operational by 2025.

Hydrogen in the news
Nouryon-led consortium wins EU backing for pioneering hydrogen project
Australia, Japan agreement to usher in the future of hydrogen

The end product, the green hydrogen, will serve as an energy source for electricity, mobility, heat and fuel, as well as for raw material for industrial centers. Green hydrogen is produced without releasing CO2. It is therefore fully renewable and aligns with the group’s energy transition goals.

At the end of 2020, 399 wind turbines will be running off their coast with an installed capacity of 2.26 GW. This new marine spatial plan provides space for a few hundred more wind turbines that will generate an extra 1.75 GW. This green power will supply half of Belgian households with electricity. However, those peaks in production rarely coincide with the consumer peaks.

It is with this energy transition in mind, as well as the need for stable power supply, that the port will temporarily store the green energy surplus via hydrogen as an energy carrier, or use it as an alternative raw material for the conversion of the industry away from fossil fuels.

By 2022, the rollout of a large-scale shore-based power project, fed with green hydrogen, will begin operating. The final measurement is planned for 2025 with a commercial green hydrogen plant in the context of the planned new offshore wind concessions.