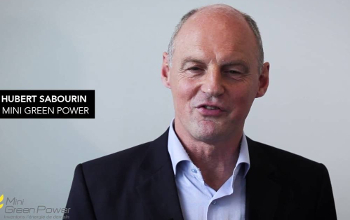 Mini Green Power, based on the French Riviera and championed by global energy giant, Engie, is about to enter a new growth phase in its development.

Hubert Sabourin, Representative of the General Director, spoke to Decentralized Energy about what Mini Green Power is bringing to the communities it serves.

Set up three and a half years ago, Mini Green Power has since then raised around EUR4m in the pursuit of its activities. That activity revolves around the company equipment’s ability to extract value from the most unpromising of biomass feedstock.

“We completed two demonstrations which are up and running in our operation in Hyères, on the French Riviera. We have also commissioned a plant in Sicily which, since the end of last year, is producing 2.5 MW thermal and 200 KW electrical.”

“We are developing other demonstrators to process Type B wood which is wood that is treated with paint or varnish or glue, converting more difficult waste into energy and a form of pure heat and/ or electricity or cooling.”

While it is small in scale compared to the larger utilities’ biomass operations, Mini Green Power’s offering could easily be replicated to cater for example, municipalities throughout Europe.

“The main point is, thanks to our process, we treat biomass that is normally not accepted in traditional biomass boilers. The resins we consume have a lower cost as opposed to wood chips or pellets, which are much more expensive. The main advantage is we process biomass with a low or even zero cost, compared to traditional feedstock.”

The bigger operators have come under scrutiny in recent years, in terms of their sourcing practices. Transporting biomass from large distances may be ethically questionable for example, but it’s not a concern for the French outfit.

“We source from nearby forests or from the local parks or gardens or all biomass collected by municipalities. It’s difficult to understand why some transport from Canada or Brazil. However, we are not on the same scale as some of the bigger companies.

“Our equipment has a current capability to provide up to 5 MW thermal and 1 mw electrical, while on average the bigger firms would have around 120 MW electrical, and this takes a huge amount of biomass to run properly.”

With temperatures inside the boiler reaching up to 1,000 degrees, it’s easy to imagine quite a lot of work in maintaining the equipment in optimal shape, but Sabourin says that is not the case.

“It’s a robust process but so is the equipment so it doesn’t take a lot to maintain and its easy to run thanks to the command and control system. The plants are designed to last 20 years with the proper maintenance each year to be able to last that duration.”

The company has a notable supporter in the form of Engie, the French energy giant currently blazing a trail in the development of innovations in the clean power sector worldwide. The multinational is also notable in acquiring promising start-ups, but at the moment, Sabourin says his firm’s management are happy to continue as they are.

“We are talking to Engie for several heat networks in France and electricity generation in isolated communities, internationally.”

“For now, we are happy to be independent but at some state in the future if there is interest in buying us we would consider it with care because we want to maintain our independence in terms of the research and development we are doing.”

“It would be a balance between the offer made to us on the commercial stage and what we want to carry out on the R&D side.”

The company is also appreciated by a French government also ambitious in leading the green energy transition. They have provided the company with two interest free loans (from the BPI – Banque Publique D’investissement) amounting to around EUR1m and the national agency for the environment has backed this up with grant allocation. As the company continues to build installations, further grants are expected.

Regulatory-wise, Mini Green Power are operating in a sympathetic landscape, and so far, only the conservative nature of French business has stifled greater success.

“The main barrier is the reluctance of French industry s to buy innovation. They want to wait until its proven first for a few 1000 hours before buying, and this impedes progress.”

Despite that, the backing of both Engie and the French government augurs well for both the company and the energy transition in France.