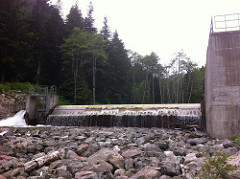 The global small hydropower sector has grown rapidly in recent decades and is expected to continue its upward trend, according to the first major study of the topic.

In a report published this month in the journal Frontiers in Ecology and the Environment, researchers at the University of Washington in the US said the small hydro trend began in Europe in the mid-1980s and installations have proliferated around the world.

At present, nearly 83,000 small hydropower plants are operational or under construction in 150 countries, meaning that for every large plant, ten small ones exist. If all hydropower capacity were to be developed, the study estimates that this number could more than triple.

The small size of these plants allows them to be built more quickly, more cheaply and in higher densities than larger projects and to avoid the regulations faced by utility-scale facilities. Indeed, “policies or regulations are lacking or largely inconsistent” for small hydro plants, the report said.

According to the researchers, few studies have investigated the environmental impacts of small hydro plants. Lead author Thiago Couto, a doctoral student in the School of Aquatic and Fishery Sciences at the University of Washington, said the world is “facing a proliferation of this kind of facility, but we don’t know exactly how their environmental impacts scale up in a watershed”. à‚

“We have identified some important gaps in policy and science that should be filled to better manage small hydropower dams and to have science that really informs policy,” he added.

Any size dam can change a river’s water flow, temperature, sediment, and ultimately its plant and animal life, the researchers noted. These factors have been long-studied for large dams, but have been largely ignored for small ones. à‚

But the potential cumulative effects of many small dams built on a single river system are worth studying. Julian Olden, senior author and a professor of aquatic and fishery sciences at the university, said: “Individually, large hydropower dams will always cause greater environmental impacts, but with rapid growth of the small hydropower sector, our rivers might just suffer from many small cuts.”

One interesting problem the researchers encountered was that different countries classify ‘small’ hydro plants differently as there is no international standard in place. This classification often ignores some factors during the licensing decision that might contribute to environmental impacts, the report said, such as significant variation in the size of the reservoir behind a plant.

To address this issue, the researchers called for a standard definition of small plants that includes other factors in addition to generation capacity “so that regulations and policies can be applied more rigorously”.