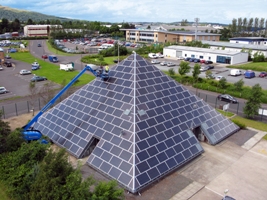 Sustainable Renewable Technologies (SRT), a British project planner, has been nominated for the ‘Solar Power Portal Awards’ for the solar system installed on a pyramid-shaped office building.

The solar pyramid has been shortlisted in the category ‘Most innovative system design’.

According to Tom King, the managing director of SRT, the solar pyramid was the most challenging project that he has planned to date.

He also confirmed that “many companies declared it to be impossible due to the building’s unusually steep inclination”.

He was responsible for designing and constructing the solar photovoltaic system, which was mounted onto the office building of Survey Solutions Scotland (pictured), a company located just south of Edinburgh in July 2012.

The completed system generates more than 41,000 kWh annually, which is enough to cover 85% of Survey Solutions Scotland’s annual electricity demand.

The winners of the Solar Power Portal Awards are due to be announced at the Solar Energy UK event in Birmingham on 8 October.