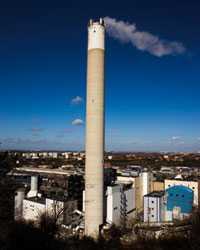 The European Investment Bank (EIB) is providing a €260 million loan to Fortum Värme for the design, construction and operation of a new biomass combined heat and power (CHP) plant.

To be located in Stockholm, the plant will deliver heat to the existing district heating system in Sweden’s capital and electricity to the public grid.

EIB is also financing the necessary biomass handling facilities and the upgrading of port facilities related to the plant, which will have a production capacity of 280 MWth and 130 MWe.

Construction of the new plant is planned to be finalised by 2016.

Between 2010 and 2015, Fortum Värme says it will invest SEK7 billion (US$1 million) in combined heat and power production. The company has 9500 district heating and district cooling customers currently.

Anders Egelrud, CEO of Fortum Värme, explained: ‘We are contributing to a sustainable city by building the future energy system for Stockholm. When the plant is in operation, 90% of our heat and electricity production will be based on renewable and recovered energy. By 2030 at the latest, this ratio is expected to be 100%.’

Three novel blockchain use cases emerging in the energy sector