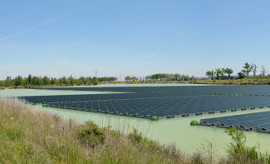 The 2.9 MW plant will be developed as two floating platforms at the Nishihira Pond and Higashihira Pond reservoirs in Kato City, Hyogo Prefecture in Japan. The 1.7 MW plant at Nishihira Pond will be the world’s largest solar power generating system installed on water, Kyocera said.

The installations will use a total of 11,256 of Kyocera’s 255 W solar modules. The project is expected to generate around 3300 MWh per year, or enough power for around 920 households. The electricity will be sold to the local utility.

According to Kyocera, the plant is expected to come online in April 2015.

Kyocera TCL Solar will develop and operate both plants using Ciel et Terre’s Hydrelio floating solar platforms (pictured), which are 100 per cent recyclable according to the company and have a 30-year lifespan.

The partners said floating solar power plants are able to generate more electricity than both ground-mounted and rooftop systems due to the cooling effects of the water. In addition, there are benefits for the reservoirs as the platforms shade the water, reducing evaporation and algae growth. The platforms are also built to withstand typhoons.