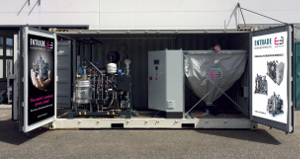 A self-contained, fully maintained combined heat and power unit generating 25 kWe and 60 kWth from biomass wood pellets has been launched into the UK market for commercial applications.

The containerised unit is powered by biomass wood pellets. VG energy has secured 40 units of the E3 Biomass CHP units from Entrade. Each generates 25 kWe and 60 kWth. Collectively the units are expected to produce a total of 8 GWh of electricity and over 19 GWh of heat annually.

The first is to be installed shortly, following the purchase of two units to produce a total of 50 kWe and 120 kWth.

Its developers claim the ‘syngas’ produced by the system is up to 100 times cleaner than leading competitor models. A unit has been heating and powering VG Energy’s head office in Ayrshire, Scotland, for a number of months.