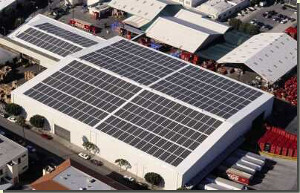 More than 15,000 Australian businesses have now installed on-site solar power to reduce their energy bills, according to the country’s Clean Energy Council (CEC).

Kane Thornton, CEC acting chief executive, said: ‘Businesses have now invested almost A$460 million (US$416 million) in solar power systems across the country, helping them to collectively save about A$64 million on their bills every year,’ He added that these businesses cover a broad range of sectors, from dairy and chicken farmers through to wineries, offices, supermarkets and retail outlets.

‘There is an increasing recognition that the current modest support provided by the RET means the business case for solar power makes sense, helping businesses become more competitive in tough economic conditions,’ Thorton continued, arguing that if the federal government decided to cut the RET following its current review of the policy, it would make it much harder for homes and businesses to go solar.

‘Some of the recommendations outlined in the recently released review would either shut down these opportunities, or make it so administratively complex for businesses to go solar that they wouldn’t bother,’ he concluded, adding: ‘This is a very effective policy which is working well and will begin to phase out naturally from 2017.’