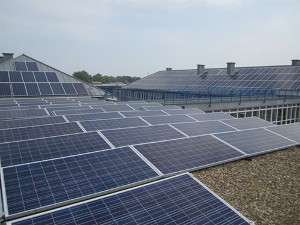 A solar project has begun operations on the roof of the Haute Senne hospital, in Soignies, Wallonia, Belgium.

The hospital will consume 95% of the power generated by its new solar rooftop installation, a 425 kWp system planned and installed by Ikaros Solar and dimensioned for a high level of self-consumption. The hospital site Le Tilleriau has an available area consisting of a mixture of flat and pitched roofs and the completed installation covers an area exceeding 3000 m2 featuring 1410 solar modules. Hanwha SolarOne supplied the solar modules for the project, one of the largest of its kind in the region.

‘With large rooftop areas available and electricity demand stable at a high level, the Haute Senne hospital was an ideal match for solar energy,’ said Yves Devis, CEO of Ikaros Solar. He added: ‘The hospital will notice the positive effect on its electricity bill immediately ” and for the next couple of decades. As often reported, the cost of electricity is generally expected to increase. By producing their own power, Haute Senne has secured a higher level of autonomy as well as improved predictability when it comes to expenses.’