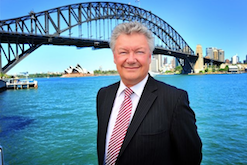 Trigeneration is to form an important part of Sydney, Australia’s plans to become 100 per cent renewable.

Allan Jones, the Chief Development Officer of Energy and Climate Change for the city, intends for Sydney to be entirely run on renewable energy sources for power, heating, cooling, and transport.

The initiative is to provide not only power, but also heating and cooling, using only renewable energy.

The plan is for conventional renewables (wind and solar) to generate 30% of the city’s electricity, with the other 70% coming from trigeneration (using biomass-fueled generators).

Trigeneration, or combined heat, power, and cooling (CHPC) is a process in which a plant generates electricity and then uses the waste heat it produces to provide heating and cooling. The heat is used to power absorption refrigerators to provide a cooling effect.